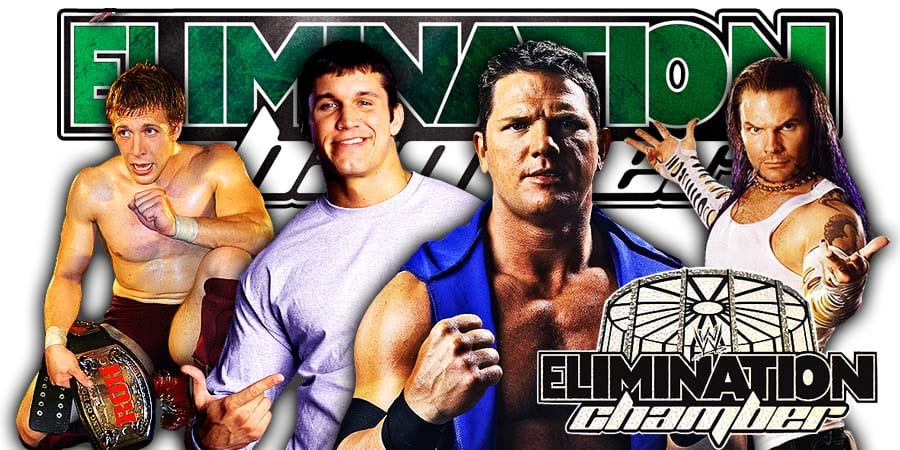 This is part 6 of our Elimination Chamber 2019 Live Coverage (part 5 is here).

Up next is the main event of the evening, it’s time for the WWE Championship Elimination Chamber match.

Randy Orton will be the last man to enter this match as he won a Gauntlet match on last week’s SmackDown to earn that right. This is Orton’s 7th Elimination Chamber match.

WWE Champion Daniel Bryan and Samoa Joe will begin this match. The referees have told Erick Rowan to go to the back.

The match begins and Joe locks in an Ankle Lock, but Bryan manages to get out of it. Bryan chops Joe, but nothing happens to Joe and Bryan is now asking for mercy.

Joe lays out Bryan with vicious chops. Joe powerbombs Bryan and then locks in the Boston Crap, then turns into a Crossface!

Kofi Kingston enters the match next and takes down both Bryan & Joe. Joe gets up and viciously chops Bryan on the chest again. Bryan runs away from Joe and climbs on top of a pod and sits there doing nothing.

Kofi reaches Bryan on top of the pod and hits him. Bryan & Kofi start climbing the Chamber’s chain walls, Joe climbs up as well. Both Bryan & Joe fall down and then Kofi jumps on top of both of them!

Joe nails Bryan with a running Senton and then hits Kofi with a Suplex. Joe goes for the cover on Kofi, but he kicks out.

AJ Styles enters the match next. Styles nails Double DDTs on Bryan & Kofi and goes for the cover on both of them, but both kick out.

Bryan is climbing up the Chamber wall and Styles hits him with a Phenomenal Forearm to the middle of Bryan’s spine!

Joe locks in the Coquina Clutch on Kofi, Kofi tries to reverse it and goes for the cover, but Joe gets out of it. Styles nails a Phenomenal Forearm on Joe and pins him!

Jeff Hardy enters the match next. Hardy sets up AJ on the top rope and hits a Swanton Bomb on Styles from the top of a pod!

Bryan immediately hits Hardy with the running knee and pins him.

Randy Orton enters the match next. Orton goes after all his opponents.

Styles goes for the Phenomenal Forearm, but Orton catches Styles on the ropes and hits an RKO. Orton goes for the cover and pins AJ.

It’s Bryan vs. Kingston now! Both Bryan & Kofi are exchanging kicks and Kofi wants Bryan to hit him!

Bryan hits Kofi with the NO! Kicks and Kofi hits the SOS out of nowhere! Kofi goes for the cover, but Bryan kicks out!

Bryan hits Kofi with the corner dropkicks, but Kofi dropkicks him down! Kofi goes for the cover, but Bryan kicks out.

Kofi is now smashing Bryan into the Chamber walls, but Bryan comes back and sends Kofi face-first into the pod glass!

Bryan delivers a vicious Running Knee and Kofi is turned inside out! Bryan goes for the cover, but Kofi kicks out! Crowd is chanting big time for Kofi.

Bryan is now kicking Kofi in the head and goes for the cover, but Kofi kicks out.

Bryan goes for the Running Knee, but Kofi nails Trouble In Paradise! Kofi goes for the cover, but Bryan reverses it and Kofi kicks out.

Bryan locks in the LeBell Lock on Kofi and crowd is chanting big time for Kofi and Kofi manages to reach the bottom rope.

Fans are now chanting “This Is Awesome”. Bryan and Kofi are now fighting on top of a pod and Kofi is smashing Bryan on the top Chamber glass.

Bryan comes down to the top rope and Kofi kicks him down. Kofi goes for the Splash off the top of the chamber, but misses!