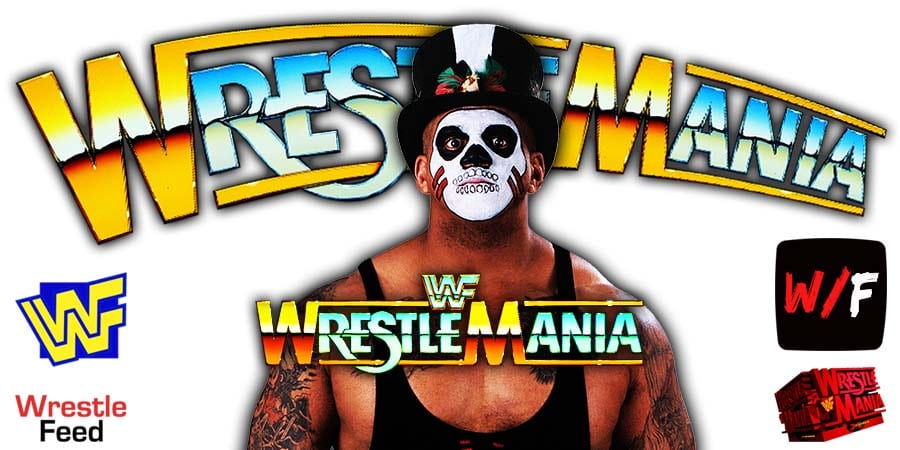 Old School WWF Legend The Godfather (Real name: Charles Wright), who also wrestled on WWF TV as Papa Shango & “The Supreme Fighting Machine” Kama before, recently appeared on the Scheduled for 2 falls podcast, in which he discussed his 1992-1993 Papa Shango character in detail, including the topic of being late for his scheduled run-in at the end of the WrestleMania VIII main event between Hulk Hogan and Sid Justice.

Here’s what the WWE Hall of Famer had to say about it:

“I wish, looking back, I wish I was not so green in the business because I could probably have been better at being Papa Shango like Kamala was at being Kamala.

I probably could have been a better Papa Shango but dude, I had no idea what I was stepping into. Going from a country tobacco chewing, country music listening, old truck driving, biker to a voodoo man. It was a stretch!

I was paid to do a job. Wrestling was always my second business. My first was girls and strip clubs, Wrestling was just a way for me to have fun. That’s why you’d see me come and go because when I wasn’t having fun, I would go.

That night [WrestleMania 8] I never heard anything from anybody at all. I was so involved in what I was doing at the time, working with Hogan, Sid, Warrior; I wasn’t really concerned.

The problem is that they knew I was green so they were going, ‘Don’t go until we tell you to go.’ And so, for whatever reason I got the cue late.

I didn’t know. I’m there at the curtain like a track star getting ready to run and it was a long way.

I never heard anything about it for years and I mean years later. I’m doing autograph signings and people are like, ‘Hey, what happened when you missed the cue?’ and I’m like, ‘No, I didn’t, what do you mean?’

So then when I started checking into it, I’m like, ‘Oh sh*t!’ I never heard it from one person, not even Taker and you know why? Because it wasn’t my fault. I never even knew about it.

I went through a bad divorce as Papa Shango. I became a very mean, ugly person. So, I took some time off wrestling. They kept trying to get me to come back and I didn’t wanna come back.

So, they said, ‘Hey, if you watch this UFC thing, there’s a guy called Kimo Leopoldo. He’s got tattoos and he’s pretty over and we’re going to do a thing like that with you’.

I’m not a professional kick boxer/boxer but I’ve always liked training so I’ve dabbled in everything. And so, I’m like…‘Nah, I don’t wanna do that.’

But then they said I could ride a Harley. I get a Harley out of this? Yeah, I’ll do it. And then ‘Taker called and I’m like ok I’ll come back. Then they took the bike away from me straight away.

For some reason they convinced me to come back as Papa Shango, but it was going to be a lot different. The makeup was different; Jerry Lawler had done the face paint.

I’d lost a lot of weight; looking good, different outfit. I show up to TV and they said Vince wants to talk to you.

I was like, ‘Cool.’ So, I went to Vince and he said, ‘Charles, change of plans. Tonight, we’re going to put you in the Nation of Domination. You’re going to wrestle with Ron Simmons against The Undertaker in a handicap match, and you’re going to go over. We made you a little outfit. So why don’t you get with Undertaker and Ron and work something out and we’ll talk later’.”

Although one of the less famous divas, she was still considered a very talented worker, who just never got her big push.