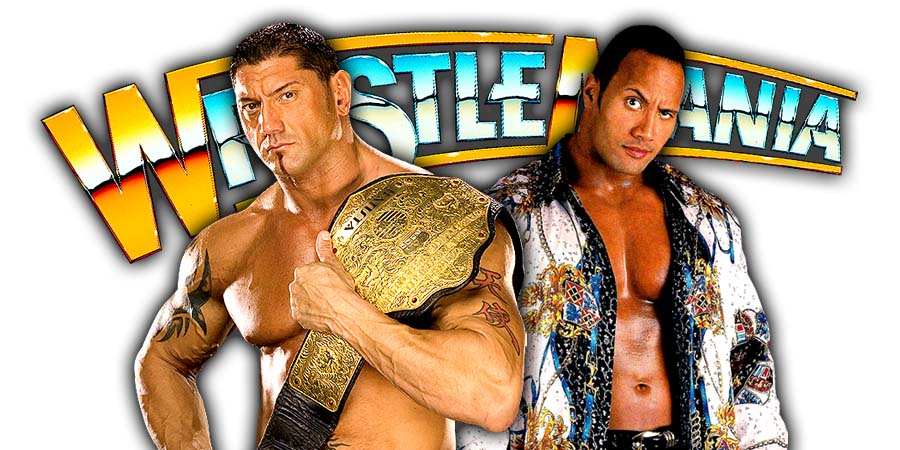 WrestleMania 34 is only a few hours and the fans are ready to have a blast for 7 hours straight! Let’s take a look at 15 plans that got cancelled for WrestleMania 34:

15. The Rock’s Segment With Elias

According to DirtySheets.Net, a major WrestleMania 34 segment featuring The Rock got cancelled.

There were plans for Raw wrestler Elias to deliver a big musical performance at WrestleMania 34, only to be interrupted by 5 former WWF/E stars with their own songs. The first 4 names and their songs were supposed to be:

– Jeff Jarrett (With My Baby Tonight)

The 5th star to interrupt Elias would’ve been The Rock with a song of his own.

However, Vince McMahon clearly told the writers that this plan would be nixed if they can’t secure The Rock for WrestleMania 34, as Vince thinks there wouldn’t be enough star power without The Rock in this 20 minute segment.

Vince then thought about replacing The Rock with WWE Hall of Famer Shawn Michaels (who would’ve sung his “Sexy Boy” theme song), but then cancelled the entire segment after thinking about it for a week.

It should be noted that The Rock could still make an appearance at WrestleMania 34, but it would be a very last minute decision.

The Rock made his last WrestleMania appearance back in 2016, where he defeated Erick Rowan in 6 seconds and joined forces with John Cena to fight off The Wyatt Family.

On the other hand, Elias has now been announced for the Andre the Giant Memorial Battle Royal on the WrestleMania 34 Kickoff Show.

14. Batista Teaming Up With Ronda Rousey

According to the Wrestling Observer, former WWE Champion Batista noted at a convention that WWE officials talked to him about teaming up with Ronda Rousey to face the team of Triple H & Stephanie McMahon at WrestleMania 34, but a deal couldn’t be reached.

According to ProWrestlingSheet, talks were going well between WWE & Batista and it was looking like seeds for a Batista vs. Triple H WrestleMania 21 main event rematch at WrestleMania 35 would be planted during this match, but talks suddenly stopped between the two parties.

Batista was under the impression that he would be used at WrestleMania 34, but then came the announcement of Kurt Angle being chosen as Ronda Rousey’s tag team partner.

Batista wasn’t notified of this change despite reaching out to them for an update on the situation.

After The Shield reunited last year, there were plans for Ambrose to turn heel and then feud with his Shield brother Seth Rollins, with the feud culminating in a match at WrestleMania 34.

However, the plans were nixed when Ambrose got sidelined with a Triceps injury.

Rollins & Jordan captured the Raw Tag Team Titles and WWE officials were planning to do the same Rollins/Ambrose angle here as well and planned to do Rollins vs. Jordan at WrestleMania 34.

However, this match got nixed too because of Jordan’s neck injury.

However, WWE went in a different direction and this idea was dropped.

In late 2017, there were plans to do a match between WWE’s 4 Horsewomen and MMA’s 4 Horsewomen at WrestleMania 34. They even did an angle for this during the Mae Young Classic tournament.

However, WWE decided to change the plans and involve Ronda Rousey in a mixed tag team match (which she’ll be a part of this Sunday at WrestleMania 34).

This resulted in WWE officials promising Sasha & Bayley a high-caliber singles match between each other at WrestleMania 34.

However, this plan ended up getting nixed as well because of Sasha & Bayley developing major backstage heat on the Road to WrestleMania 34.

During the Survivor Series 2017 Men’s Elimination match, Triple H Pedigreed his own team member Kurt Angle and helped in Angle getting eliminated from the match.

After the Men’s Survivor Series 2017 elimination match ended, Braun Strowman laid out Triple H for getting in his way.

WWE did angles for Triple H with both Strowman & Angle so that they have options for Triple H’s WrestleMania 34 match.

However, this plan also ended up getting next because of the next plan in the point below.

After doing angles between HHH/Angle & HHH/Strowman, WWE decided to do a Mixed tag team match at WrestleMania 34 between the teams of Triple H/Stephanie McMahon and Braun Strowman/Ronda Rousey.

Soon after this plan was discussed, reports came out from filmmaker Jon Bravo that Roman Reigns was a client of jailed steroid dealer, Richard Rodriguez.

WWE officials thought this would end up being a PR nightmare if it gets proven to be true.

This resulted in WWE pulling Strowman from the Mixed Tag Team match and getting him ready to be added to the Universal Title match at WrestleMania 34 or replacing Reigns from the main event of WrestleMania 34 altogether.

In the meantime, for the Ronda Rousey’s feud to continue, Kurt Angle was named her parter.

Then Bravo failed to provide evidence against Reigns in the steroid scandal and WWE went ahead with their planned Universal Title match.

This resulted in Strowman being eliminated from both the Mixed Tag Team match and Universal Title match picture.

WWE were doing an angle where Raw Tag Team Champions The Bar (Sheamus & Cesaro) were claiming that they have beaten every tag team that’s available on Raw and were sending open challenges.

WWE officials planned The Bar defended their Title against the team of Kevin Owens & Sami Zayn at WrestleMania 34.

The storyline would’ve been Owens & Zayn complaining about how Shane McMahon screwed them during the WWE Championship match at FastLane PPV.

This would’ve resulted in Daniel Bryan announcing a tag team match between the teams of WWE Champion AJ Styles/Shinsuke Nakamura and Kevin Owens/Sami Zayn with the stipulation being that Owens & Zayn would be added to the WWE Championship match at WrestleMania 34 if they win this match.

Shane would’ve then added another stipulation that Owens & Zayn would be fired from SmackDown Live if they lost this match.

Owens & Zayn would’ve then lost the match and would’ve been forced to leave SmackDown Live as a result of it.

They would then be hired by Raw General Manager Kurt Angle and be presented as The Bar’s WrestleMania 34 opponents.

However this plan got cancelled by Braun Strowman’s WrestleMania 34 plan (which is explained in point #3 below).

After Owens & Zayn would’ve been fired from SmackDown Live, WWE officials decided to go in the direction of giving Dolph Ziggler his first ever singles match at WrestleMania and it would’ve been against Shane McMahon.

The storyline would’ve been very similar to what AJ Styles & Shane O’Mac did at last year’s WrestleMania 34.

They even had Ziggler tease this feud during one of his promos, but this feud got nixed because of Braun Strowman’s plan as well (which is explained in the point below).

According to DirtySheets.Net, Kane was scheduled to face Braun Strowman in a Casket match at WrestleMania 34, but the plan got nixed when WWE officials decided that Strowman challenging and then defeating The Bar (Sheamus & Cesaro) to win the Raw Tag Team Championship single-handedly would be a better WrestleMania moment.

This eventually resulted in WWE cancelling the planned Kevin Owens/Sami Zayn vs. The Bar match and this in turn led to the cancellation of Shane McMahon vs. Dolph Ziggler match as WWE officials decided to resume Shane O’Mac’s feud with Owens & Zayn.

Shane McMahon will now team up with Daniel Bryan to face Owens & Zayn, while Ziggler & Kane will end up being a part of the Andre the Giant Memorial Battle Royal at WrestleMania 34.

With Rusev getting over with the fans, WWE officials decided to book him to win the Andre the Giant Memorial Battle Royal to give the fans a feel good moment to kick off the show.

However, WWE officials then decided to reward Rusev in a big way by putting him in the United States Championship match on the main card of WrestleMania 34.

This is a reward because wrestlers get more bonus pay if their match is on the match card instead of being on the Kickoff Show (pre-show).

Yes, this was indeed the plan.

WWE officials planned to give “The Modern Day Maharaja” Jinder Mahal a lengthy 300+ day reign as WWE Champion, which would’ve ended at WrestleMania 34 by none other than John Cena, who would’ve made history by becoming a 17 time World Champion with this Title win.

However, things didn’t go well with Jinder as the main champion on SmackDown Live and WWE decided to have him drop the belt to AJ Styles prior to his scheduled match with Brock Lesnar at Survivor Series 2017 (which he didn’t get to be a part of since he lost the Title and the Survivor Series match was a “Champion vs. Champion” match).

Mahal is now a part of the United States Championship match at WrestleMania 34, while Cena will be facing The Undertaker.