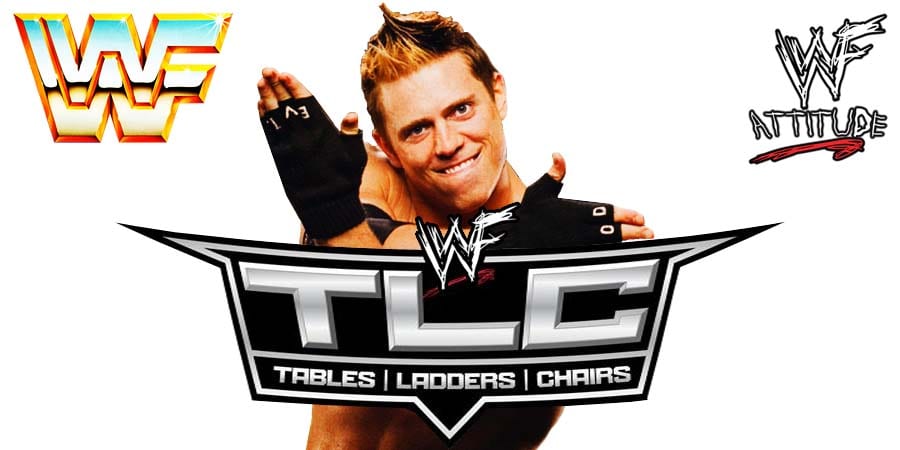 The last WWE pay-per-view of the year, TLC: Tables, Ladders And Chairs, is upon us. It will emanate tonight from the Target Center in Minneapolis, Minnesota. It is a packed show, and WWE actually has the potential to stitch together a good show.

Bray Wyatt will step inside the ring for the first time tonight since The Fiend’s debut to take on The Miz. Roman Reigns will take on King Corbin in a TLC match while The New Day will defend their SmackDown Tag Team Championship against The Revival in a Ladder match.

In addition, Becky Lynch and Charlotte Flair will have an opportunity to take off the WWE Women’s Tag Team Championship off of The Kabuki Warriors in the first ever TLC Women’s Tag Team match. Bobby Lashley and Rusev will settle their beef in a Tables match and Aleister Black will take on Buddy Murphy. The Viking Raiders will issue an open challenge to defend their RAW Tag Team Titles.

WWE usually pulls several swerves at their pay-per-view events and TLC is expected to have many of them as the company will be looking to end 2019 on a high note.

So without further ado, let’s take a look at 6 surprises that could happen at TLC tonight.

The final chapter between King Corbin and Roman Reigns will be written tonight as they’ll lock horns in a TLC match. Over the past few months, Corbin and Reigns have tried to humiliate each other in the worst ways possible.

Reigns will most likely win this bout to finish his last rivalry of 2019. In addition, Corbin already got a win over him a couple of weeks ago on SmackDown, so Reigns will get to settle the score with him tonight.

However, one possible swerve we could see during the match is an appearance from Dolph Ziggler. The Showoff has had issues with Reigns since he and Robert Roode joined forces with Corbin.

Ziggler’s partner Roode was viciously beaten down by The Big Dog a couple of weeks ago and Ziggler himself was thrown off a ladder through the table by Reigns this past Friday on SmackDown.

“The Celtic Warrior” Sheamus is set to make his return to SmackDown after missing 8 months of action. Back in April on the RAW after WrestleMania 35, Sheamus and Cesaro interrupted the Champion vs Champion match between Seth Rollins and Kofi Kingston, leading to a 6-Man Tag Team match.

The next night on SmackDown The Bar joined forces with Drew McIntyre to battle The New Day. However, Sheamus wasn’t seen in the WWE after that. He was dealing with a career-threatening spine injury, but he is good to go now and is perhaps in the best shape of his career right now.

Three weeks ago, he surprised the WWE Universe by appearing on the titantron to rant against SmackDown. He’s been talking about how the blue brand’s state has been pathetic without him and how the wrestlers there have become lazy.

There’s a possibility that he might show up tonight at TLC. Although it’s unsure during which match he might show up, he could do it during any match of the blue brand as he took shots on the whole roster.

He specifically named King Corbin, Shorty G and The Fiend so he could show up during King Corbin vs. Roman Reigns or Bray Wyatt vs. The Miz.

WWE’s next step in its Women’s Revolution comes tonight at the TLC pay-per-view. Tonight, the first ever Women’s Tag Team TLC match between the team of Becky Lynch & Charlotte Flair and The Kabuki Warriors will take place with the WWE Women’s Tag Team Championship on the line.

Whether they teamed up or faced them alone, Becky Lynch and Charlotte Flair were humiliated every time by The Kabuki Warriors. After proving their dominance on RAW, Asuka and Kairi Sane challenged Flair and Lynch to a Tag Titles match tonight which they accepted.

Lynch and Flair are two of the biggest Superstars in WWE right now so they have higher odds of walking out with the Titles. However, WWE could surprise us by giving Asuka and Sane a win tonight.

Neither of the two teams have to be pinned to win the Titles as it is a TLC match, which protects the credibility of both of them. The Women’s Tag Team Champions have an advantage as the match will have No Disqualification rules and they are used to cheating.

In addition, Asuka is rumored to face Becky Lynch for the RAW Women’s Championship at the Royal Rumble next month, which may be a hint that their rivalry will continue after TLC. WWE could go with an angle where The Kabuki Warriors retain their titles at TLC and vow to take the other title off of Lynch too.

Since leaving WWE in 2011, John Morrison wrestled in different promotions including Impact Wrestling and Lucha Underground which has made him a bigger deal than he was back in 2011.

A few of weeks ago on WWE Backstage, Ryan Satin confirmed that The Guru Of Greatness had signed with WWE. The news was broke by PWInsider a couple of months ago.

Morrison has been training for his in-ring return and looks in pretty good shape. He could return to the ring anytime now. It could be as soon as tonight at TLC.

8 years since I’ve been in a @WWE ring ?
Real ropes ain’t the same as the cables I’ve been doing my stuff on since I’ve been away- the wwepc is epic ?? @ WWE Performance Center https://t.co/zlEQcJPICz

He could show up during Bray Wyatt vs. The Miz. The A-Lister is one of his best friends and is going to have a huge battle against Wyatt tonight to protect the honor of his family. The Guru Of Greatness could show up to aid The Miz in taking out Bray Wyatt.

2. The Usos Challenge The Viking Raiders For The RAW Tag Team Titles

Another return that could take place at TLC would be an arrival from The Usos. The 6-Time WWE Tag Team Champions were last seen on WWE programming on the July 29th episode of RAW where they lost a triple-threat RAW Tag Team Championship match against The Revival and Gallows & Anderson.

WWE probably gave them time off due to Jimmy Uso being arrested a couple of days prior under charges of DUI in Pensacola, Florida. That was the second time he was charged with DUI.

Their return has been rumored over the past couple of months but WWE reportedly changed plans due to having no creative plans for the duo. There were reports that they would make their return on SmackDown’s premiere on FOX. However, that did not happen.

There was also speculation that they would join forces with Roman Reigns against King Corbin, Dolph Ziggler and Robert Roode, but plans may have changed due to Roode’s suspension.

Tonight, The Viking Raiders will issue an open challenge for the RAW Tag Team Championship. The Usos were drafted to RAW back in October and there’s a possibility they could make their return tonight by challenging Erik and Ivar.

1. The Fiend Costs The Miz His Match Against Bray Wyatt

One week after The Fiend emerged from under the ring to brutalize Daniel Bryan and pull out his hair, The Miz waited for Daniel Bryan on Miz TV. He wanted answers of what happened between him and The Fiend, but Bryan did not show up.

He has been missing since The Fiend’s attack and Bray Wyatt even hinted that he might still be with him. While Bryan is out of the picture, Wyatt picked a fight with The Miz as The A-Lister tried to expose him.

Tonight, they’ll be locking horns in a non-title match. The Miz wants to protect his family from Wyatt as he’s playing mind games with him by involving his wife and daughter in their rivalry.

Wyatt wants to teach Miz a lesson for poking his nose in his business. One interesting thing is that The Fiend hasn’t been a part of this rivalry. But WWE could finally bring him in the equation at TLC.

WWE could go with an angle where The Miz is about to defeat Wyatt and suddenly the lights go off and Wyatt changes his attire into The Fiend and attacks The Miz as The Fiend when lights are back on.