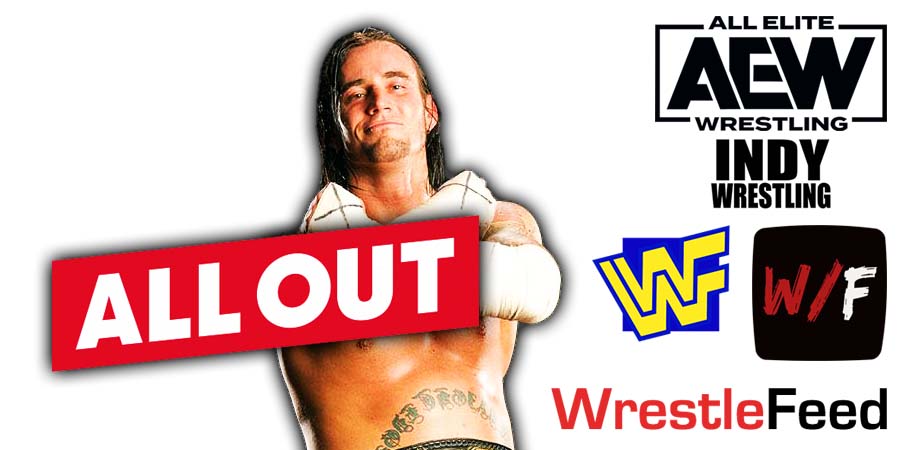 Tonight’s episode of AEW Dynamite was the 100th episode and the final edition of the show before this Sunday’s All Out 2021 pay-per-view. Below are the complete results:

– CM Punk got attacked by Daniel Garcia & 2.0. Darby Allin & Sting came out and all three of them took out Garcia & 2.0. Punk & Darby faced off after this. Sting said he always wanted to share a ring with Punk, and told Punk & Darby that he knows they will tear the house down at All Out.

#2point0 and @GarciaWrestling have jumped @CMPunk!

Tune in to @tntdrama NOW to watch #AEWDynamite! pic.twitter.com/t9ysNcLQIf

.@DarbyAllin and @Sting are here to aid @CMPunk against the attack from #2point0 & @GarciaWrestling

Tune in to @tntdrama NOW to watch #AEWDynamite! pic.twitter.com/3ZM5Gz5dSu

A tense faceoff between @CMPunk & @DarbyAllin before their match at #AEWAllOut on PPV this Sunday!

Tune in to @tntdrama NOW to watch #AEWDynamite! pic.twitter.com/rbuwzUInFV

– MJF said Chris Jericho is like Muhammad Ali in being an addict to the spotlight and doesn’t know when to quit. At All Out, he will have the distinct honor of ending one of the greatest runs in professional wrestling.

– Eddie Kingston said Miro’s neck is his weakness, and he’s going right after it at All Out. After he takes the TNT Title, Miro will no longer be God’s Favorite Champion, but they can go to hell together. Miro said he only stays down for his wife in a hotel room after a victory. At All Out, he will give The Mad King redemption & agony.

– Chris Jericho was interviewed by Jim Ross in the ring. Jericho thanked the fans for letting him be a part of their life and for them being a part of his. Jericho said if MJF wants to end his career he needs to be his best self. Jericho stated that MJF will not take this away from him, that MJF does not have the balls to end it.

– QT Marshall called out “The Big Show” Paul Wight to the ring, ahead of their match at All Out this Sunday night. Wight entered the ring and was immediately attacked by QT’s men. After some struggle, Wight managed to take them all out.

WWE Hall Of Famer Billy Gunn and his sons came to Wight’s rescue in the ring, and then Billy turned heel after attacking Wight with a Steel Chair.

QT & his men then entered the ring and QT took out Wight with his finisher (RKO / Diamond Cutter).

.@PaulWight clears the ring of #TheFactory and the #GunnClub stands shoulder to shoulder with him.

Tune in to @tntdrama NOW to watch #AEWDynamite! pic.twitter.com/eCSIuafBqf

WHAT IN THE WORLD?! @RealBillyGunn just leveled @PaulWight with a chair!

Tune in to @tntdrama NOW to watch #AEWDynamite! pic.twitter.com/jRw8SztWpK

– AEW Women’s World Champion Britt Baker announced that she has a big free agent news and it’s that someone has signed a long term deal with AEW, who will be a big money draw for years. Britt revealed that it’s herself.

– Tay Conti def. Penelope Ford (After the match, Penelope & Allie attacked Tay, but the returning Anna Jay made the save)

– The Elite def. Lucha Brothers & Jurassic Express (After the match, The Elite kept beating them down. Impact World Champion Christian Cage tried to make the save, but he got taken out. AEW World Champion Kenny Omega took the keys to the room that controls the Steel Cage and lowered it down. The Elite beat down Lucha Brothers & Christian with Kendo Sticks, while other babyfaces tried to get in the Cage to help them)

Also Read: Spoiler On The Outcome Of CM Punk’s AEW Debut Match At All Out 2021