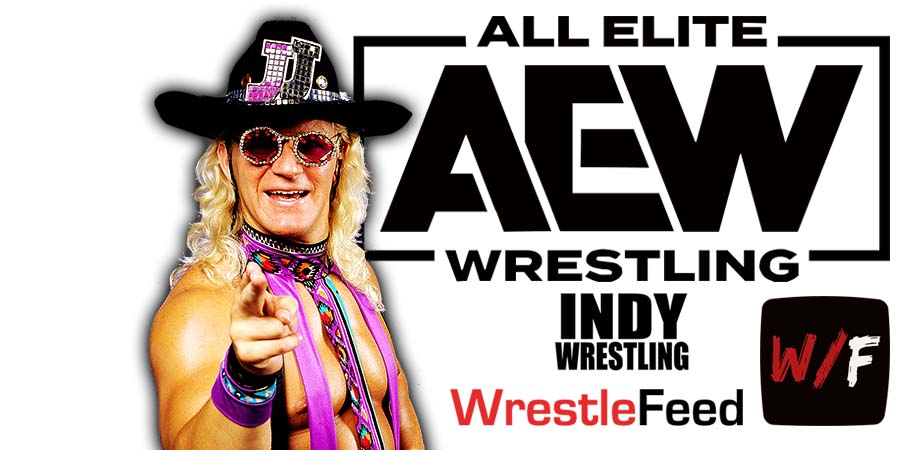 Below are the completer results from tonight’s episode of AEW Dynamite:

After the match, WWE Hall Of Famer Jeff Jarrett debuted and hit Darby in the head with a Guitar, and said he’s The Last Outlaw.

Tune in to #AEWDynamite LIVE on TBS right now! pic.twitter.com/HTF8utadZ1

Jarrett then talked about his family being in the wrestling business for 75 years, and bragged about being a 2-time Hall of Famer and 12-time World Heavyweight Champion. Jeff then ripped the AEW fans and put the entire roster on notice.

.@RealJeffJarrett makes his intentions known and clear here at #AEW!

After the match, Ethan Page laid out Moxley with a Big Boot.

– Britt Baker and Saraya were scheduled for a sit down interview with Renee Paquette, but Britt chose not to come. Saraya said she will have an update on her in-ring return status next week after she talks to one more doctor.

– The Acclaimed threw a Birthday Bash for WWE Hall Of Famer Billy Gunn. They presented Billy with Foam Fingers and went into the crowd to collect fans’ gifts for Billy. They gave Billy a World’s Greatest Dad trophy and gave him a Certificate of Adoption so he can be their Step Father.

The Firm crashed this bash and attacked Billy & The Acclaimed. FTR came out and chased them off. FTR held the AEW World Tag Team Titles for a moment before giving them back to The Acclaimed.

✂️✂️✂️ Foam fingers for all your Scissoring needs, available at https://t.co/XtpDuzX56R!#AEWDynamite is LIVE on TBS! pic.twitter.com/HohE1oPKDK

After the match, Jericho taunted Ian Riccaboni. The Blackpool Combat Club came out and got into a brawl with The Jericho Appreciation Society.

Pac attacked Cassidy after the match, but Katsuyori Shibata made the save. Shibata then signed the contract to face Cassidy for the Title in Cassidy’s “Dream Match” on Friday’s Rampage.

Nyla Rose and Vickie Guerrero were on the stage during the match and talking trash to distract Jade. Kiera Hogan tried to get back the TBS Title from Nyla for Jade, but Nyla took her out.

– A vignette was shown of Julia Hart bringing back The House of Black members.

After the match, The Embassy beat down Joe. TNT Champion Wardlow then tried to make the save, but got taken out by Powerhouse Hobbs.

It included mid-card matches featuring the SmackDown! Superstars on the road to the ‘WWE Survivor Series 2002’ PPV.