It was broadcasted from the Pittsburgh Civic Arena in Pittsburgh, Pennsylvania and featured matches, interviews & storyline segments on the road to the ‘WWF No Way Out 2000’ PPV.

According to the Wrestling Observer, AEW Superstar Chris Jericho recently taking a shot at WWE Universal Champion Brock Lesnar on Twitter wasn’t an accident or Jericho having fun while being drunk, but it was something that Jericho did before with Kenny Omega as well (Jericho began his feud with Omega on Twitter and then moved to NJPW).

The Observer noted that there could be interest from AEW Officials in signing Lesnar and they could do it through Jericho (a person who has worked with Lesnar before).

While AEW managing to sign Brock would be highly unlikely, as Vince McMahon would be willing to beat any offer in order to keep Brock with WWE (as we have seen before with UFC), this is turning out to be a very favourable situation for Brock as he’s a very smart businessman and knows how to get the best deal for him.

You can check out Jericho’s deleted tweets (where he took shots at Lesnar & WWE) below: 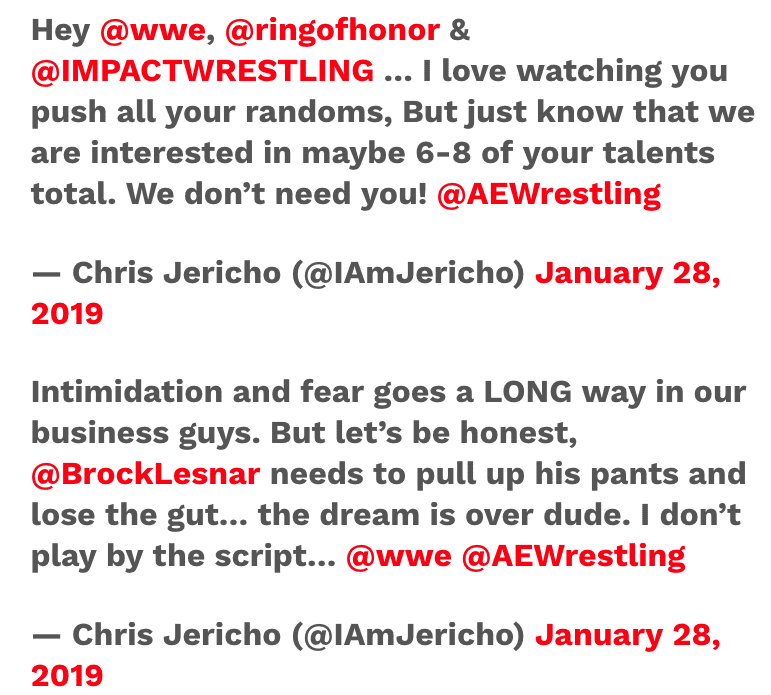