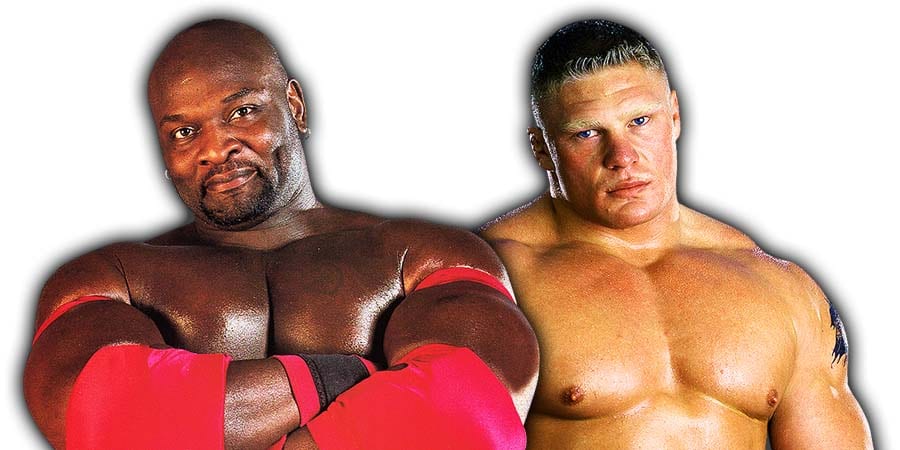 It was broadcasted from the McKenzie Arena in Chattanooga, Tennessee and featured matches, interviews & storyline segments on the road to the ‘WWF Royal Rumble 2001’ PPV.

6. Right To Censor vs. The APA

7. The Rock vs. The Undertaker

In this flashback article, we take a look back at former WWF Superstar Ahmed Johnson’s appearance on The Unsanctioned Podcast, where he talked about a possible match with Brock Lesnar, winning the Intercontinental Title, backstage altercation with The Rock & more.

On Stevie Ray saying that Ahmed forgot spots in a match during the Harlem Heat / Booker T angle in WCW:

“No, what I did was, the match was made to make Booker look like a superstar, and I wasn’t. So I didn’t go for it. I acted like I forgot the whole damn match. So we can go live. I’ve been wanting to live with them negroes for a long time anyway. Booker T ain’t said s*** to me. I wish he would have. That’s why since we walked in the back, I wish we could have just got in the ring and do what we do. If he was a real brother, I wouldn’t have mind doing the shine for him to make him look good. But he just makes me sick to my stomach.”

On what would’ve happened if he ever faced Brock Lesnar:

On why he stiffed Goldust during their King of the Ring match:

“I love Goldust. Goldust is one of the best workers there is. What happened was, is I told him not to be kissing me and stuff for real, because we had rehearsed it to where he was supposed to put his hand over my mouth and kiss his hand. Because it was live TV I couldn’t move if he did whatever he did that he said he would. And he didn’t do it. He kissed me for real. And I was like, ‘uh-huh’. That was blow-up time.”

On when did they tell him that he was going to win the Intercontinental Title and what happened with him after that:

“I didn’t know. Because, what they did, they got us in the ring, they didn’t tell us who was going to win or lose. They wanted to see how the match went. So, right at the end of the match, the referee whispered to me and said, ‘Go over, Vince wants you to go over.’ And so I went over and, boom, we got that big crowd pop and I became the first black singles champion in WWF history.

And it was cool until I went out to my car and somebody had scratched ‘congratulations n****r’ on my car. It was definitely one of the boys. Where we parked at, nobody could get to our cars but the boys. Somebody said they seen some of the boys back there, you know by the car. I couldn’t put my finger on it.”

On his real life backstage fight with The Rock:

“What happened was, he was back in the locker room and I was already back there on the other side of the lockers, so, he couldn’t see me. And he walked in there with Triple H and Shawn, and they were all talking and they were making black jokes, and they didn’t know I was there.

When Triple H said, ‘Man, we were joking Rocky, we were joking,’ and Rock said, ‘That’s okay, people look at me and think I’m black. I’m not black, man. My mom had an affair on my dad with a white man. That’s my dad. The white guy is my dad.’

He was serious as a heart attack. So I stepped from around the locker and said, ‘What you just say?’ He said, ‘Aw, aw, nothing, man, you know just here bulls****ing,’ and I said, ‘Yeah, I heard you over there selling that bulls***, man. What did you say about your dad? You mean to tell me this man bust his a** for us to be in this federation, and you’re denying him?’ Then he got cocky and said, ‘Man, this ain’t none of your business’. Once he said that, we went for blows. After that, Ron Simmons and Papa Shango broke it up.”

On Teddy Long recently calling him an idiot:

“That b****. First of all, I don’t even know this punk mother******. Ain’t never met him once in my life. Never. Never ever been in the same room with this fool. And I’ll tell you right now, straight up, if I ever see him cause he’s got himself going around with churches and being a Christian, I swear to God if he ever comes to Houston, I’m giving you my word, I’m going to that church where it is he is, and I’m gonna go to him and I’m gonna slap him in the f***ing face. And I mean that with all my heart. He’s going to be more elderly when I get done with him.”

On what he thinks about the current SmackDown Tag Team Champions, The New Day:

“Now come on, don’t one of them got a doctorate degree or something? Come on, man. But Vince got you acting like a clown on a clown car. I think it is shucking and jiving for him. I just think that especially homeboy with that degree [Xavier Woods], they can find something better for him. He could be like a Clarence Mason, like a black wrestling Clarence Mason.”