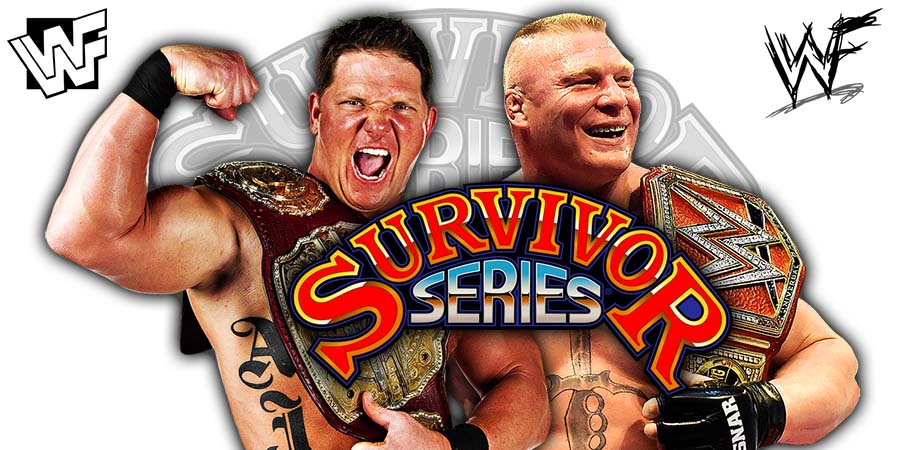 It was broadcasted from the Allen County Coliseum in Fort Wayne, Indiana and featured pre-taped matches & storyline segments on the road to the ‘WWF Survivor Series 1990’ PPV.

– Koko B Ware vs. Ted Dibiase

As seen on last week’s episode of SmackDown Live, “The Phenomenal” AJ Styles lost the WWE Championship in the main event to Daniel Bryan.

According to Dirty Sheets, Bryan defeating Styles to win the WWE Title and then turning heel was the finish that WWE officials had planned for WrestleMania 35.

Yes, Bryan & Styles were set to collide at WrestleMania 35 after picking up big wins over The Miz & Randy Orton (with Styles overcoming Miz and Bryan overcoming Orton).

However, plans began to change when Bryan refused to go to Saudi Arabia for WWE Crown Jewel. WWE officials tried to punish Bryan by taking him out of SmackDown’s WrestleMania 35 main event for the WWE Championship by changing plans from Styles vs. Bryan to Styles vs. Orton for the WWE Championship, with the storyline being Orton has taken out all the top babyfaces on SmackDown (Jeff Hardy, Rey Mysterio, Daniel Bryan), except “The Phenomenal One”.

However, Bryan still ended up winning the WWE Championship last week out of nowhere and the originally planned WrestleMania 35 finish with the heel turn taking place.

Dirty Sheets noted that this decision was made because of Styles’ current situation with WWE.

Styles’ current contract is set to expire on December 31, 2018. WWE & Styles have been negotiating on a new contract for months now, but they still haven’t been able to reach a deal.

Styles is reportedly looking for a 3 year deal with reduced dates, while WWE is offering a 5 year full-time deal.

The negotiations have been going on for so long that WWE officials actually used some of Styles’ reasoning for a reduced schedule in feud with Samoa Joe, where Joe pointed out Styles isn’t at home much for his family (which is one of the main reason why Styles wants reduced dates on his new contract).

With Styles’ contract running out in less than 2 months and no new deal being signed yet, WWE officials decided to pull the trigger and take the WWE Title off Styles, thus leaving him without a match at tonight’s Survivor Series 2018 PPV (where he was scheduled to face Universal Champion Brock Lesnar prior to his loss to Bryan).

This was not the plan going into Tuesday last week, as WWE planned to air an AJ Styles special on the WWE Network immediately following Survivor Series 2018 as the plan was for Styles to pick up a huge “fluke victory” over The Beast Incarnate.

The original plan was for Lesnar to become complacent with a beaten, broken down Styles and then Styles would have pinned Lesnar with a roll-up out of nowhere.

Lesnar would have then destroyed Styles after the match and this would’ve played into Styles heading into his TLC 2018 PPV WWE Title defense while being “hurt”. Styles was originally scheduled to defend the WWE Championship at TLC 2018 in a Fatal 4 Way TLC match with the following opponents: Jeff Hardy, The Miz & Samoa Joe. Styles was scheduled to win this match as well.