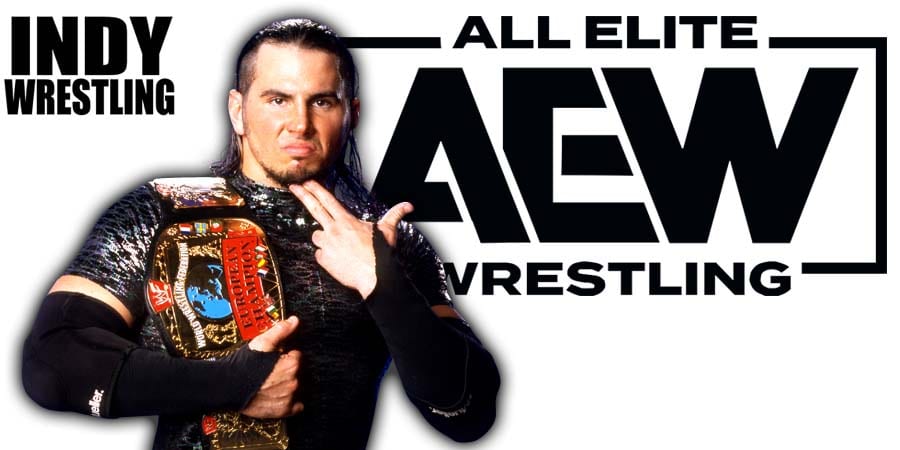 Then known as Double D, she accompanied Ric Flair to the ring afterwards and – because of her size – was occasionally getting involved in Flair’s matches.

A little later on, now known as Asya, she became the valet of The Revolution, a faction that included Perry Saturn, Dean Malenko, Chris Benoit & Shane Douglas.

She then managed “The Demon” Dale Torborg before she was let go by WCW in August 2000 and got married to Torborg in October.

This wasn’t a blade job, but Matt was busted open the hard way due to Sammy’s mistake.

According to the Wrestling Observer, the original plan was for Sammy to pick up a traditional folding chair and throw it at Matt, where Matt would’ve protected himself by putting his hands up.

However, Sammy got too excited and couldn’t find the folding chair, so instead he picked up the other, heavier chair and threw it at a high speed. Matt did get his hands up, but it wasn’t enough and he ended up bleeding heavily.

Sammy got major heat backstage in AEW after this, and a lot of people were unhappy. Guevara received a “very stern talking-to” when he returned backstage.

A huge thank you to @DocSampson13 & the @AEWrestling medical team for quickly repairing the painful, gaping hole on my face. #AEWDynamite pic.twitter.com/QCDbW6gKi6

Matt Hardy sent the following message to Guevara after this incident:

YOU CANNOT KILL ME LIL B*TCH