• Batista Makes An Interesting Comment After Looking At Sasha Banks’ A$$

Former WWE Champion Batista is a fan of kadunkadunks. For those who don’t know what that means, you can read the definition below:

“Someone who has a wide juicy, thick scrumptuous fat a$$. Remember this person has a fat a$$. They are not a fat a$$ person…there’s a big difference!”

As we have noted before, Batista was impressed by Bayley’s a$$ earlier this year and posted the following comment on Instagram:

“Damn! Bayley’s got a kadunkadunk! Good for her! Get it girls!!”

Well, now we know that Batista is a fan of former RAW Women’s Champion Sasha Banks’ a$$ as well!

Batista made an interesting comment under this post and tagged Sasha in it. You can read it below:

“Sasha Banks step into my office. I need to talk to you about something. ? #gogirls” 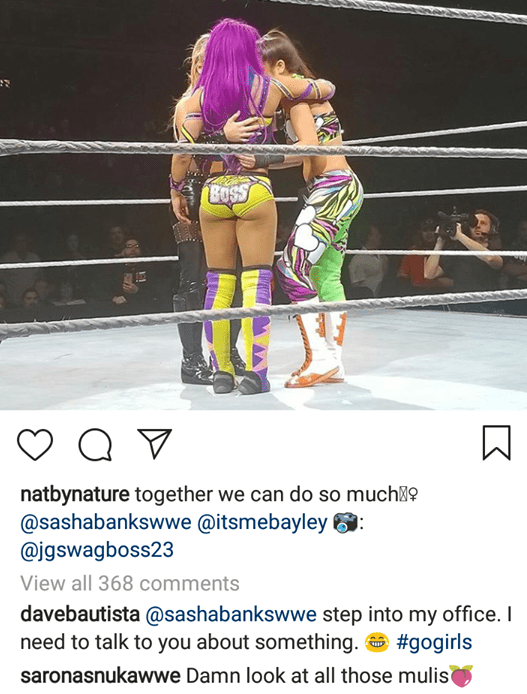 It looks like Batista wants to unleash “The Animal” on “The Boss”!

Well, we hope Batista reads this article because he wouldn’t want to miss the following video of Sasha Banks twerking during a match: