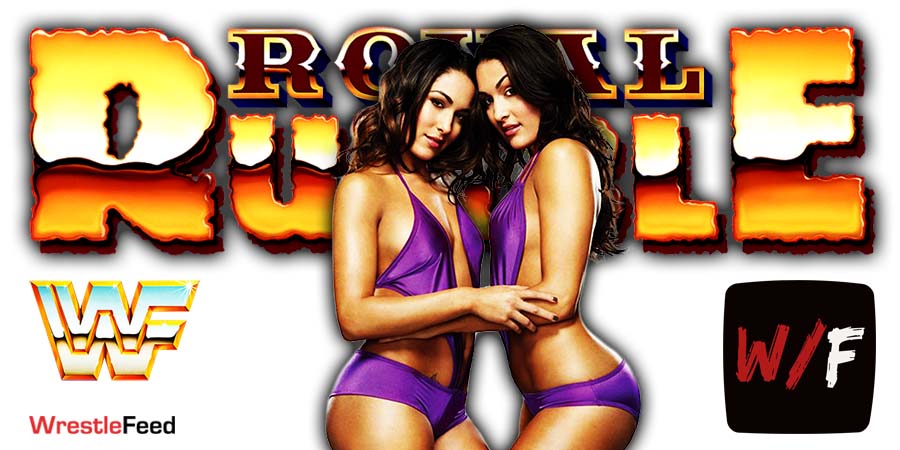 • Bella Twins Reveal What Shocked Them Regarding Their Upcoming WWE Return

WWE Hall Of Famers The Bella Twins, Nikki & Brie, will return to in-ring action during the 2022 Women’s Royal Rumble match.

WWE confirmed them as entrants in the match two weeks ago.

The Bellas discussed their return on their podcast. You can read their conversation below:

Nikki: Can you believe they announced it?! So everyone, if you don’t know, you’re gonna know now. Brie and I are officially entering the 2022 Women’s Royal Rumble.

It’s gonna be at the end of the month, Saturday, from St. Louis stadium, which how amazing where The Rams used to play. We’re gonna go in there and kick some butt!

I was shocked they announced it because usually, these are surprises, but I understand marketing-wise.

Brie: So, business-wise it makes sense, right? Because now we’re gonna have the whole Bella Army there!

Nikki: Selfishly, that’s why I was so happy about it because no one would have expected you and me to be in the Royal Rumble, and so it makes me very happy that The Bella Army knows, so they can go.

Brie: When I saw that Lita was in it, and Summer Rae, I miss that girl. I can’t wait to see Summer! That’s what the Royal Rumble does.

It brings together different generations of women and men to meet in the ring for one big night, and that’s why it’s important to go to the Royal Rumble because you might not see a lot of our faces again for a really long time.

– Doink “The Clown” vs. Rich Meyers