On this day in pro wrestling history on July 8, 2002, one of the most famous injuries took place when Kevin Nash tore his quad on WWE Raw. This was Nash’s first match since he suffered a torn biceps injury, and he ended up tearing his left quadriceps.

“Kevin Nash tore his quad” became one of the most famous wrestling meme on the internet. Below is an example: 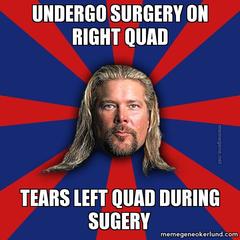