In the first match of tonight’s post-Crown Jewel edition of SmackDown of FOX, Bayley defeated Nikki Cross to retain the SmackDown Women’s Championship.

“The Boss” Sasha Banks made her presence felt during the match and distracted Nikki multiple times to help her friend, Bayley.

After the match, NXT Women’s Champion Shayna Baszler appeared out of nowhere and laid out both Sasha & Bayley to make a huge impact ahead of Survivor Series 2019.

As we noted earlier, it’s going to be RAW vs. SmackDown vs. NXT at Survivor Series 2019. 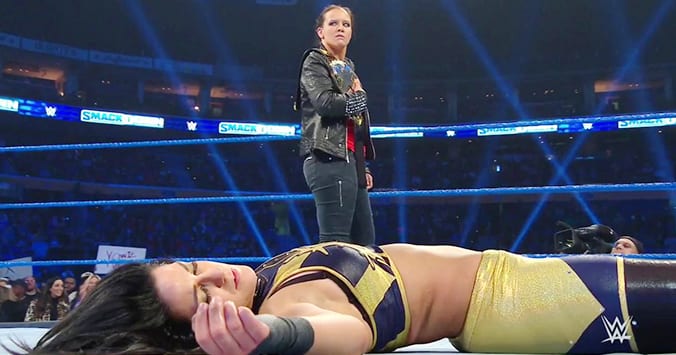 Zayn then ran away and Lee & Riddle followed. They come out running to the ring and Riddle catches Zayn. He brings Zayn into the ring and Zayn tries to attack him, but Riddle takes him out with his finisher.

After this, the 340 lbs Keith Lee hits a Moonsault on Zayn!

It’s safe to say that NXT has invaded SmackDown!