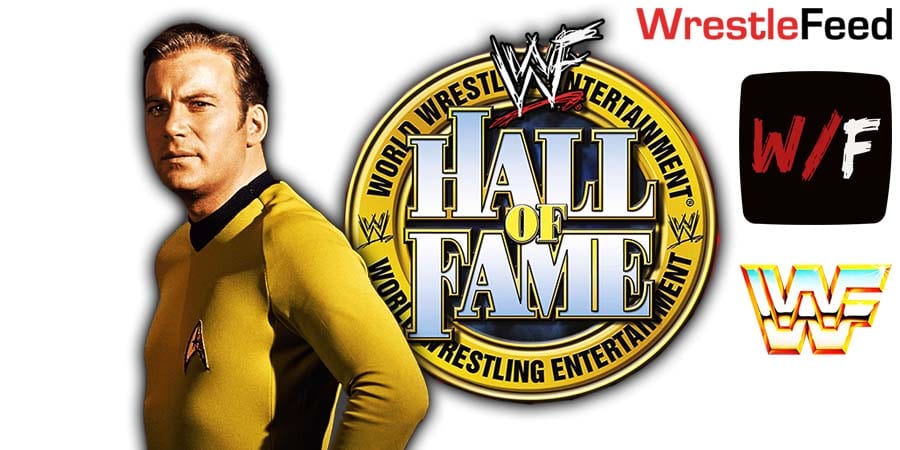 “Captain Kirk himself, William Shatner, will be beamed into the WWE Hall of Fame as a member of the Class of 2020. He will take his place in sports-entertainment history during the 2021 WWE Hall of Fame Induction Ceremony, streaming next Tuesday, April 6, on Peacock in the United States and WWE Network everywhere else.

He made his first trek into the WWE Universe in early 1995, when he appeared as the special guest on Jerry “The King” Lawler’s “King’s Court.” Shatner didn’t take too kindly to Lawler’s badgering and sent “The King” flying with a monkey flip. Shatner returned to Raw one week later to be in Bret “Hit Man” Hart’s corner for a showdown with Jeff Jarrett. When Road Dogg got a little too close to the action, Shatner decked him with a big right hand and rammed him into the turnbuckle.

The disagreement between Shatner and Lawler turned out to be water under the bridge, as Shatner returned to WWE in 2007 to induct “The King” into the WWE Hall of Fame.

Shatner came back to the red brand as a special guest host in February 2010. In addition, Shatner was also the narrator for the WWE Network reality series ‘WWE Breaking Ground’.”

BREAKING: As first reported by @USATODAY, @WilliamShatner is being inducted into the #WWEHOF as a member of the Class of 2020 during the 2021 WWE Hall of Fame Induction Ceremony! https://t.co/Cq1KrhIrKJ

Below are the names that will be inducted next month: