During an appearance on Busted Open Radio, Billy Corgan talked about former TNA World Heavyweight Champion Nick Aldis (Magnus) being buried openly in the company and nobody wanting to work with him.

“I sat in many TNA meetings where Nick name came up and people in the company openly buried him. And you would say this guy is in his prime – both as a performer and as a talent – and it was always about his attitude. People didn’t want to work with him.

Me personally, never had an issue. I’ve been friends with his wife, Mickie James, for years so maybe that changed the tenor of the dynamic with working with him. So when the opportunity came up for him to be involved with the NWA, we jumped at it because we think he’s a top tier talent.”

PEOPLE Magazine reported yesterday that a source close to the John Cena – Nikki Bella situation told them that Brie Bella was furious over the breakup and wants to kill Cena.

Below is what the source told PEOPLE Magazine:

“On one level, Brie wants to kill him, sure. No one should be allowed to hurt her sister like this. But honestly, on another level, there’s relief. Nikki was bending over backward to accommodate this guy and everyone, especially Brie, was worried that she was sacrificing way, way too much — most of all, motherhood.

She will be such an amazing mom someday, and she loves Brie’s baby so much. So of course that’s what Brie wanted for Nikki. To have to hear her trying to convince herself and everyone else that she would be fine just giving it up, it was so hard. Brie never bought it.

There’s some relief that at least Nikki can go forward and find someone who will really give her everything she’s dreamed of. Because that guy isn’t John. Never was.”

Brie Bella responded to this report in her Instagram Stories and confirmed that the report from PEOPLE Magazine is false and that she will always love Cena like a brother.

You can check it out in the screenshot below: 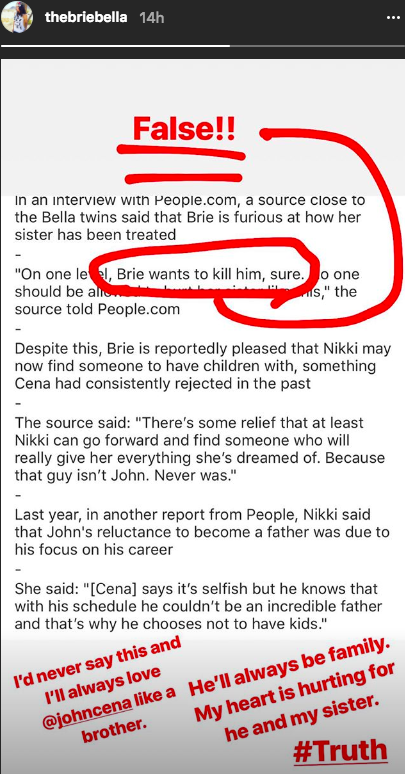