On this occasion, Jericho decided to post a photo of his physique and show off his abs.

A fan then commented the following under the photo:

Jericho replied the following to this fan:

“So does your face.” 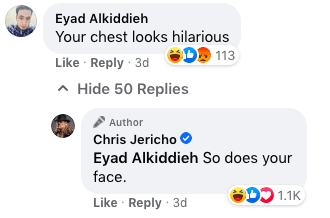 The Legion Of Doom vs. The Orient Express

The British Bulldog vs. Pez Whatley