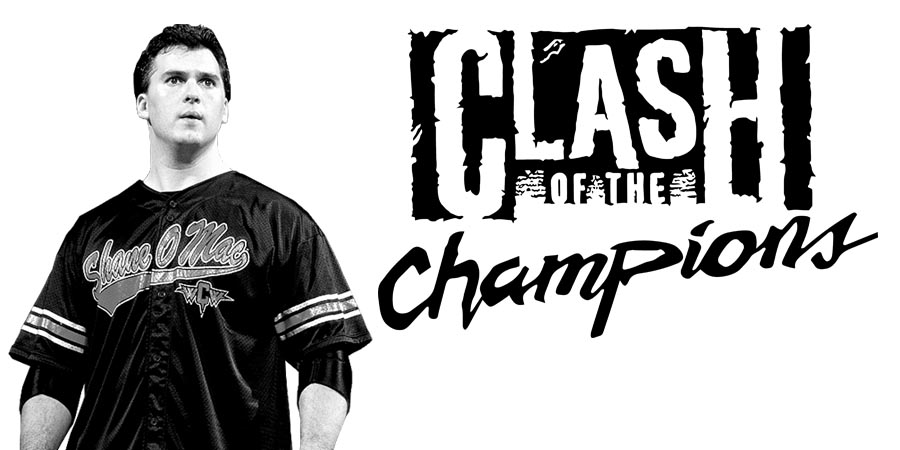 Tonight’s Clash of Champions 2017 is a SmackDown Live exclusive PPV and it is the final PPV of 2017. It is airing live from the TD Garden in Boston, Massachusetts. Below is the match-card for tonight’s show:

– The Bludgeon Brothers vs. Breezango

The PPV begins with a Kickoff match between the former members of The Hype Bros tag team, Zack Ryder & Mojo Rawley.

As expected, the Andre the Giant Memorial Battle Royal 2017 winner puts away the former Intercontinental Champion!

The main show begins with the Triple Threat United States Championship match. After some good back and forth action, Dolph Ziggler wins the match in a very cool finish where Corbin was going for the End of Days on Roode, but Ziggler nailed a Zig Zag on Corbin from behind for the win!

Up next is the Fatal 4 Way tag team match for the SmackDown Tag Team Championship.

The SmackDown Tag Team Title match delivers once again as all the four teams put on a great match. The end came when The Usos nail a Superkick and a Splash on Chad Gable for the win.

After some good action in the ring, the action goes to the outside and the Lumberjacks begin fighting, but Naomi stops everything by jumping on all of them from the top rope.

Carmella enters the ring at one point and is looking to cash-in her Money in the Bank briefcase, but The Riott Squad stops her from doing that.

All Lumberjacks are brawling on the outside now and Charlotte hits a Moonsault on all of them on the outside! Natalya then pushes Charlotte head-first into the ring post and takes the action in the ring.

Charlotte turns the tables by locking in the Figure 8 Leg Lock and Natalya taps out!

Natalya gets interviewed in the ring after her loss and she talks about how she has carried the Women’s Division for 10 years and the fans still turned their backs on her. Natalya ends her promo by saying that now she has turned her back on them and lies the ring crying.

Up next is a Tag Team match. Breezango (Fandango & Tyler Breeze) comes out first and then Harper & Rowan, The Bludgeon Brothers, make their way out.

The match begins and the action quickly reaches outside the ring where The Bludgeon Brothers lay out both their opponents.

The Bludgeon Brothers quickly finish the match after hitting the Double Crucifix Powerbomb on Fandango for the win.

Up next is the tag team match in which Kevin Owens & Sami Zayn’s WWE careers are on the line. The two special guest referees, Shane McMahon & Daniel Bryan makes their way out first.

The babyface team of Randy Orton & Shinsuke Nakamura comes out next and then out comes Kevin Owens & Sami Zayn.

Orton & Zayn begin the match and both Shane O’Mac and Bryan are in the ring officiating at the same time.

Randy Orton nails an RKO on Zayn and Shane goes to count the pinfall, but Daniel Bryan gets pushed by Owens and he falls on Shane’s back! Orton is getting in Daniel’s face and Owens comes from behind, but Orton nails another RKO.

Both referees go back and forth on pinning and then Zayn goes for the pin on Orton and Shane refuses to count to 3!

Bryan is not happy and he shoves Shane. Zayn goes for the pin on Orton again and Bryan counts very quickly to 3 and Zayn and Owens save their jobs!

Up next is the main event of the evening, it’s the WWE Championship rematch between AJ Styles & Jinder Mahal.

Former WWE Champion “The Modern Day Maharaja” Jinder Mahal makes his way out first along with The Singh Brothers (who didn’t introduce Jinder tonight). It should be noted that Jinder was WWE Champion for 170 days, which is the longest WWE Title reign of 2017. He looks to become a two time WWE Champion tonight.

Out next is the WWE Champion, “The Phenomenal” AJ Styles. The match begins and Jinder gets the upperhand early in the match.

Styles is looking to hit a Phenomenal Forearm, but Jinder shakes the ropes and Styles goes down. Jinder then hits a Gut Buster and goes for the pin, but Styles kicks out.

Jinder is looking to hit something on Styles in the corner, but Styles counters and hits an Electric Chair drop on Jinder. Styles now hits an Ushigoroshi Neck Breaker on Jinder.

Jinder is looking to hit the Khallas, but Styles hits a Pele Kick. Jinder now hits a big kick and goes for the pin, but Styles kicks out.

Jinder is now looking to hit the Khallas from the second rope, but Styles nails a Pele Kick again! Styles hits the Sprinboard 450 Splash now and Styles goes for the pin, but The Singh Brothers make the save.

Styles nails a Springboard diving forearm and a Styles Clash to put away the Singh Brothers on the outside. Styles goes for the Phenomenal Forearm on Jinder now, but misses. Jinder takes advantage of this and nails a knee to the back of Styles and then nails the Khallas, but Styles kicks out!

Jinder is now looking to hit the Styles Clash on Styles, but Styles counters and locks in the Calf Crusher and Mahal taps out!

Jinder Mahal is now completely out of the WWE Championship picture as he lost his Title rematch.