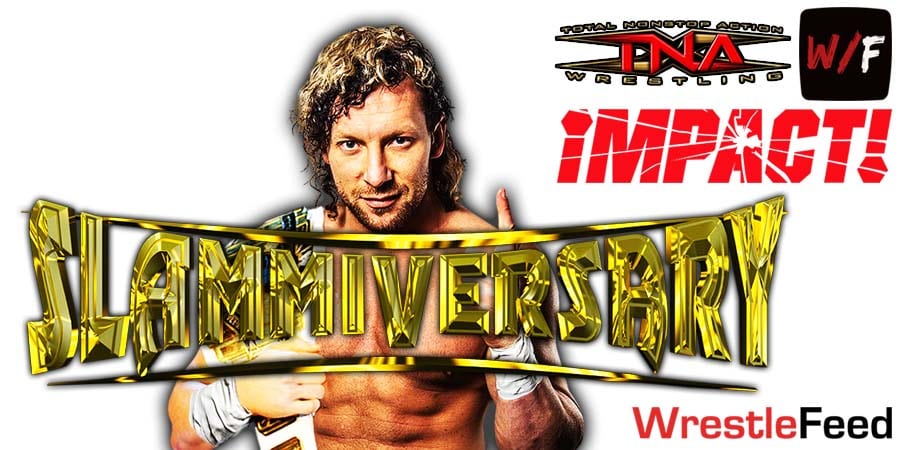 – Matt Cardona and Chelsea Green def. Brian Myers (with Sam Beale) and Tenille Dashwood (with Kaleb with a K)

THE HOT MESS IS BACK! @ImChelseaGreen is @TheMattCardona's partner! #Slammiversary

– A promo for Aiden English’s arrival on Impact Wrestling was shown.

– Deonna Purrazzo (c) def. Thunder Rosa to retain the Impact Knockouts Championship (After the match, Mickie James came out and confronted Deonna. Mickie invited Deonna to attend the NWA All Women’s PPV next month, which she’s going to produce. Deonna told Mickie to get her trash bag and get the hell out of her ring. Deonna shoved Mickie, which led to Mickie taking her out with a Chick Kick)

The LEGEND @MickieJames is BACK at #Slammiversary!

– AEW World Champion Kenny Omega (c) def. Sami Callihan in a No Disqualification match to retain the Impact World Championship (After the match, NJPW star Jay White showed up and the show went off the air – which means they’ll show what happened here on the next episode of Impact Wrestling)

.@JayWhiteNZ HAS ARRIVED AT #Slammiversary!

This episode was broadcasted from the Nationwide Arena in Columbus, Ohio and featured matches, interviews & storyline segments on the road to the ‘WWE Vengeance 2003’ PPV.