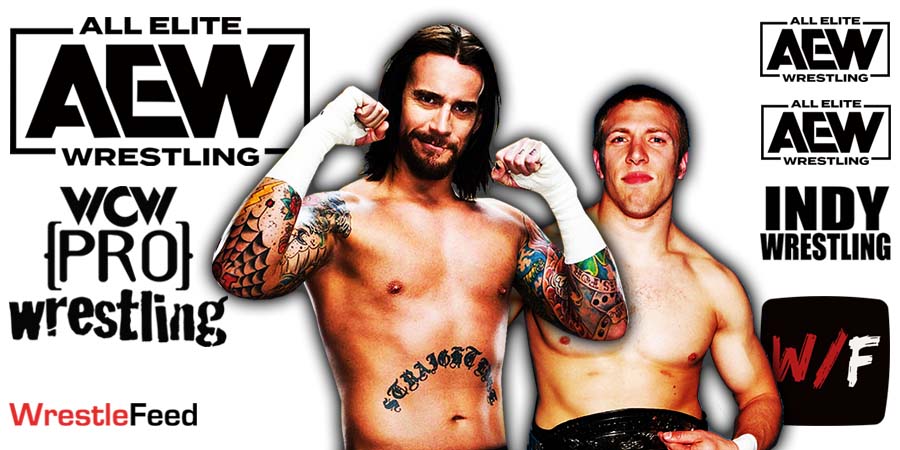 Below are the results from tonight’s post-All Out episode of AEW Dynamite:

– CM Punk thanked Darby Allin, Sting and all the fans for All Out. Punk wondered what’s next for him.

Taz interrupted and told Punk that he needs to leave Team Taz members out of his mouth. Punk told Taz that he didn’t bring them up. Taz said he’s heard Punk bring up Hobbs & Starks in interviews and he needs to stop it.

Punk told Taz to send him Ricky Starks, Hook & PowerHouse Hobbs: “Beat me if you can, survive if I let you.”

.@CMPunk will definitely get under the skin of @OfficialTAZ with that one – Tune in NOW to watch #AEWDynamite LIVE on @tntdrama. pic.twitter.com/oudQtnHVDN

– AEW Women’s World Champion Britt Baker isn’t impressed by Ruby Soho. Britt told Ruby to run away to catering where she spent the last 4 years of her life.

– MJF came out and was upset. MJF claimed he defeated Chris Jericho clean in the middle of the ring at All Out, but the match was restarted as a bias against him.

MJF said Cincinnati is the biggest dumpster fire of the midwest, and told anyone to jump the guard rail and attack him, so he can beat their a$$. MJF mocked Brian Pillman Jr’s sister as well as other fans in the crowd.

Brian Pillman Jr. came out and he said his city breeds badasses like his Dad & Jon Moxley. MJF said it’s a shame his drug addicted mother could’ve birthed a number of possible 2nd generation wrestlers and ended up with him instead of swallowing.

MJF & Pillman Jr got into a brawl. Griff Garrison came out and tried to help Pillman Jr, but got taken out by MJF and Wardlow.

– The Pinnacle def. Dark Order (After the match, Dark Order got into an argument and started blaming each other)

– The Elite called out their newest member: Adam Cole. Cole called Tony Schiavone a nerd and threatened to beat his a$$ if he ever looked at Britt Baker the wrong way.

Cole said he’s always been Elite, and praised them. Cole said The Elite is complete with him, and will show it next week when he has his first match in AEW (against Frankie Kazarian on Dynamite).

Bryan Danielson interrupted and he wants a match against Kenny Omega. Bryan claimed Omega is scared to accept his challenge as Omega knows he’s not on his level.

#TheElite is complete with @AdamColePro, who makes his #AEW in-ring debut next week on #AEWDynamite – Tune in NOW to watch #AEWDynamite LIVE on @tntdrama pic.twitter.com/O42bmeCDRC

The Hardliners vs. The Enforcers