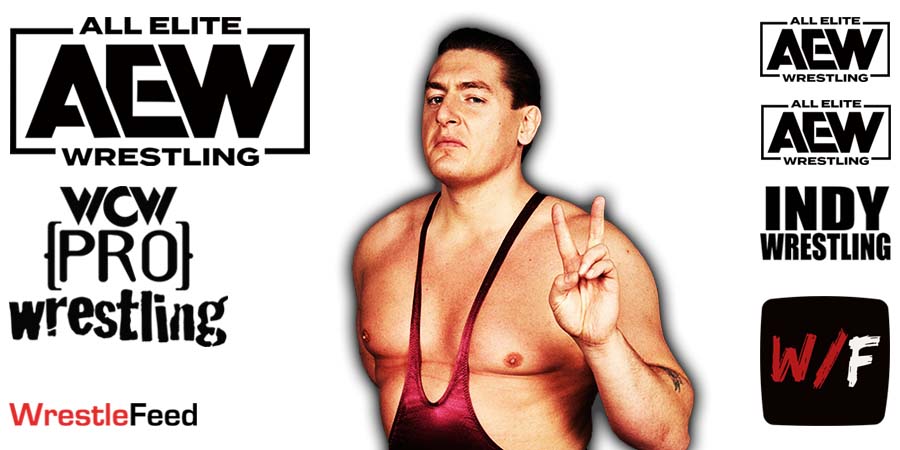 All Elite Wrestling taped tonight’s episode of AEW Rampage after Wednesday’s episode of Dynamite went off the air.

– Hook got interviewed, but he said nothing and kept on eating his chips. Danhausen then popped out of the trash can and tried to curse Hook, but Hook threw the chips packet at him and left. Danhausen then ate those chips.

– Sammy Guevara tried to get a rematch against Scorpio Sky for the TNT Championship, but Sky & Dan Lambert turned him down.

Ethan Page said that Sammy & Tay are a PR Nightmare and prayed that his daughter Gabrielle never turns out like Tay Conti.

Sammy told Ethan that he doesn’t care about his daughter and will make his and Sky’s life a nightmare every week until he gets what he wants.

– Smart Mark Sterling offered Tony Nese to be his next client.

After the match, William Regal’s Blackpool Combat Club offered Yuta to join their group and Yuta accepted the offer.

Seemingly the only way @JonMoxley could take out a defiant @WheelerYuta is by choking him unconscious in this absolute WAR on #AEWRampage on @tntdrama right now! pic.twitter.com/lDRw1qtKQF

The ultimate sign of respect extended to @WheelerYuta by @RealKingRegal and the #BlackpoolCombatClub! An insane main event to cap off an incredible night of action on #AEWRampage on @tntdrama tonight! pic.twitter.com/0nJEWc0eoH

On this day in Pro Wrestling history on April 8, 2018, World Wrestling Entertainment aired ‘WrestleMania 34’ LIVE on PPV from the Mercedes-Benz Superdome in New Orleans, Louisiana.