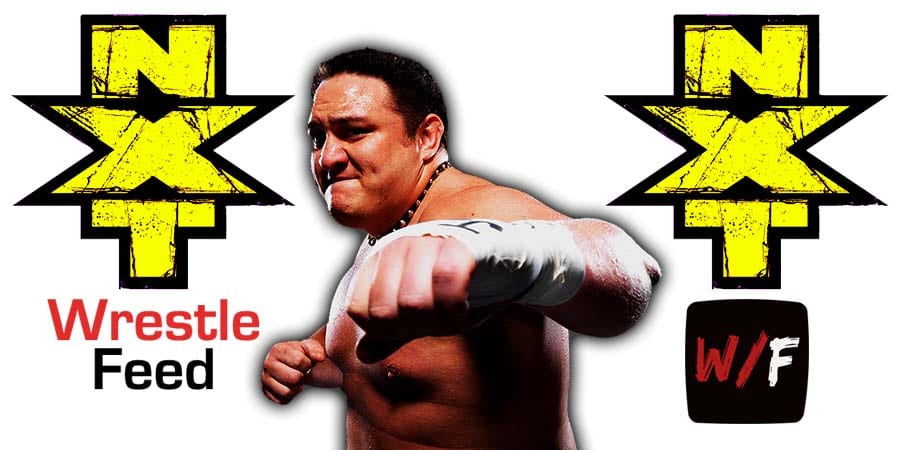 – NXT kicked off with Samoa Joe calling out NXT Champion Karrion Kross. NXT General Manager William Regal interrupted and told Joe that he can’t be calling out superstars as part of the deal they made. Joe said Kross provoked him when he choked him out last week, and claimed Regal can’t control Kross. Joe announced that someone is going to be put to sleep by the end of the night.

– The next NXT TakeOver will take place on the night after SummerSlam.

– NXT will be airing on Syfy for the next 2 weeks due to The Olympics. Adam Cole vs. Bronson Reed is announced for next week.

– Legado Del Fantasma are about to hold a Mariachi Madness Musical. Santos Escobar said the fans don’t deserve their music and sent a message to Hit Row that he wants the NXT North American Championship. Hit Row interrupted. Isaiah ‘Swerve’ Scott said it took all of Legado to defeat him last time they faced off. They got into a brawl. Scott hit Joaquin Wilde with a Guitar.

– Odyssey Jones def. Andre Chase to advance to the next round of the Breakout Tournament

– NXT Tag Team Champions MSK are about to reveal what ‘MSK’ stands for, but Imperium interrupted before they could say it.

– Drake Maverick def. Million Dollar Champion LA Knight with a Roll Up (After the match, LA attacked Drake and blamed Cameron Grimes for his loss. Grimes pulled LA off of Drake. LA ordered Grimes to punch Drake as part of his Butler duties)

– Samoa Joe called out Karrion Kross again. Kross appeared on the screen and said he can go wherever he wants, and hurt anyone he wants. Kross revealed that he attacked William Regal. As Joe ran to the back, Kross asked Joe if he thinks he is still in control, and then drove away.