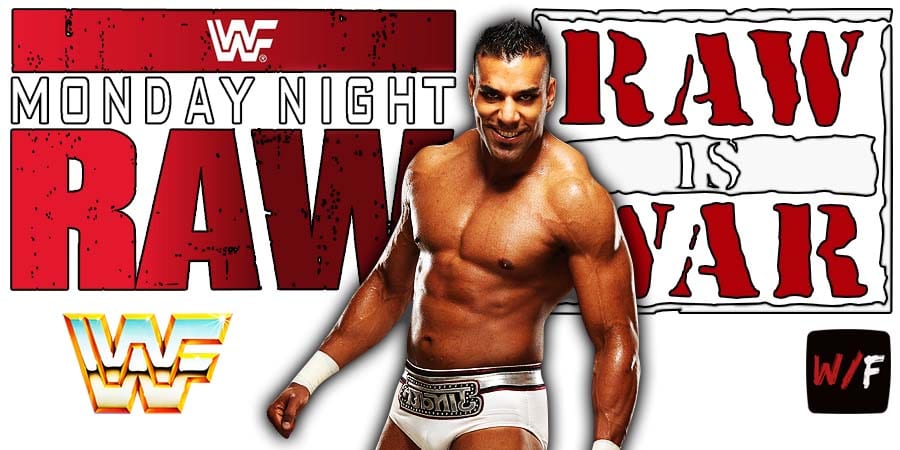 – RAW kicked off with the Men’s Money in The Bank participants appearing on MizTV. John Morrison, Drew McIntyre, Ricochet & Riddle all explain why they will win at Money in the Bank.

RAW Tag Team Champions AJ Styles & Omos interrupted. AJ said he was screwed last week, and wasn’t pinned in the Triple Threat Match, and he should be in the Money in the Bank match.

Riddle said AJ looks so cute just like a bunny rabbit, so Omos made Riddle fall off the ladder.

– John Morrison def. Ricochet via count-out with some help from The Miz

– Jinder Mahal arrived on a motorcycle. Jinder said he requested a match against his former friend Drew McIntrye later tonight. Jinder claimed he’s always been better than Drew, and will prove it tonight.

– Drew McIntyre def. Jinder Mahal via DQ after Veer & Shanky interfered (After the match, Jinder, Veer & Shanky beat down Drew. Jinder said since Drew cost him his spot in Money in the Bank, he will take away his family sword)

– Charlotte Flair came out with a crutch and gave a medical update. Charlotte said she might have to miss Money in the Bank due to her being injured by RAW Women’s Champion Rhea Ripley.

Rhea came out with her own crutch. Rhea mocked Charlotte and said she just did what Charlotte would’ve done, and thinks she’s just being a drama queen.

Both women kicked the crutch out of each other’s hand, and got into a crutch fight.

– Jaxson Ryker & R-Truth def. Elias & Cedric Alexander despite the fact that R-Truth walked out on Ryker to chase after the 24/7 Title

It was pre-taped in Des Moines, Iowa and featured matches, interviews & storyline segments on the road to the ‘WWF In Your House 16: Canadian Stampede’ PPV.