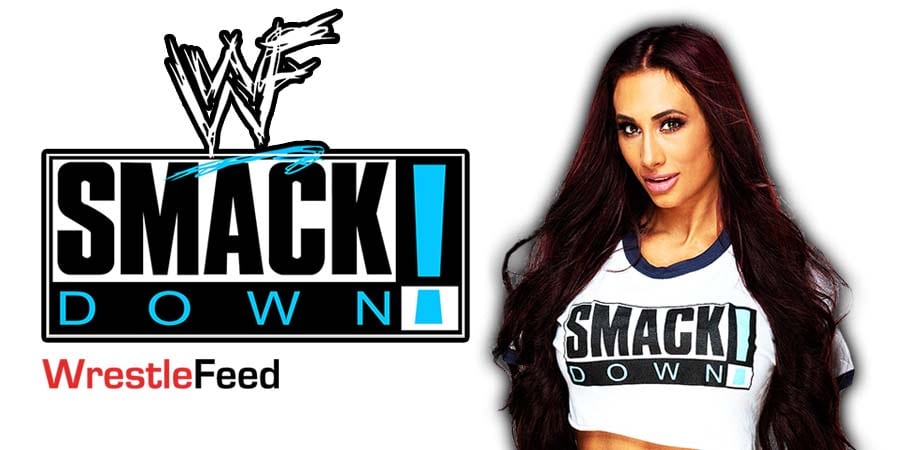 – Edge came to the ring for a promo to kick off SmackDown. Edge said what happened last week didn’t need to happen if the roadkill named Daniel Bryan hadn’t weaseled his way into his WrestleMania 37 match.

Edge said he of all people should’ve seen an opportunist coming his way, and admitted that he got outplayed.

Edge said he wants to thank Bryan because he finally looked himself in the mirror and saw The Rated R Superstar again. Edge said he’s a Hall of Fame Legend that Roman Reigns and Daniel Bryan wish they could be.

– Corey Graves interviewed Seth Rollins & Cesaro in the ring. Rollins said he’s unshakable, and talked about his WrestleMania moments. Cesaro said he knows he can defeat and embarrass Rollins.

Rollins threatened to end Cesaro tonight. Cesaro told him to take a swing, but Rollins left.

– Billie Kay offered Carmella her resume, and she accepted it

– Sami Zayn had a red carpet premiere for his documentary with Logan Paul. Sami asked Logan if he will be his guest at WrestleMania 37 for his match against Kevin Owens. Logan said he will.

Logan said he spoke to Owens backstage, and KO told him there is no conspiracy. KO then came out and hit a Stunner on Zayn.

– King Corbin vs. Drew McIntyre is announced for next week’s final RAW before WrestleMania 37. Corbin said he will take out that Scottish clown once and for all.

– Apollo Crews said he doesn’t want a regular one on one match against Big E for the Intercontinental Championship at WrestleMania 37. Crews said he wants a Nigerian Drum Fight.

– Daniel Bryan def. Jey Uso in a Street Fight (After the match, Bryan went after Edge and Roman Reigns. Bryan put Reigns in the Yes Lock and had to be pulled off. SmackDown ended with Bryan standing tall)

7) Big Bubba Rogers vs. Manny Fernandez (Not the original)