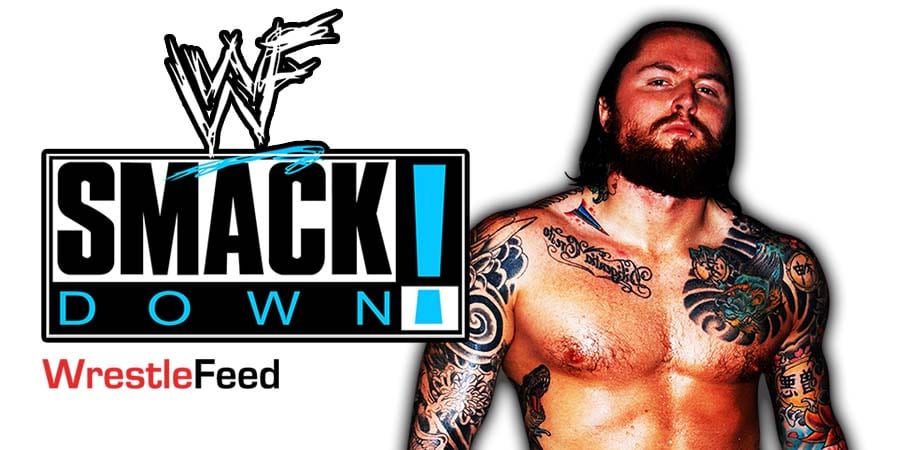 Jey Uso interrupted. Jey said that Cesaro doesn’t deserve to face his cousin Roman Reigns and wants a rematch against him.

Daniel Bryan came out and evened the odds for Cesaro. Bryan said Cesaro has worked harder than both of them, and he deserves a shot at the Universal Title.

Universal Champion Roman Reigns came out next. Reigns said Bryan is a loser who lost at WrestleMania 37, and Cesaro is a loser for listening to him. Roman called them Main Event Losers.

– Apollo Crews (c) def. Kevin Owens to retain the Intercontinental Championship (After the match, Owens hit Crews with a Stunner. Commander Azeez attacked Owens and took him out with a Nigerian Nail. Sami Zayn then started dancing in front of a beaten down Owens)

– Aleister Black returned to WWE TV with a vignette. Black read from his book ‘Tales of the Dark Father: The Dragon’. Black talked about a child whose father took him to the burnings of other people where he learned not how to defeat the dragon, but become one. Black said people are weak minded and turn their children into bigger monsters than they are, and those people should be scorched from the earth.

Let’s cut the weeds, sing our songs and let me tell you a story riddled in sins. You will know me, you will know him. You will dance with me in the abyss. pic.twitter.com/1nNxmvNjk7

– Bianca Belair vs. Bayley for the SmackDown Women’s Championship is announced for WrestleMania Backlash. Bayley told Bianca that it will be an honor to be her first challenger, and praised her performance from WrestleMania 37. Bianca was surprised, and thanked Bayley. Bayley then laughed at Bianca as she was kidding.

– Apollo Crews will defend the Intercontinental Championship against Big E next week.

– Cesaro called out Roman Reigns to know if he will defend the Universal Championship against him. Roman came out and turned down Cesaro’s challenge.

Roman instead challenged Daniel Bryan to a match next week for the Universal Championship.

Reigns then revealed that if Bryan loses that match, he will be banished from SmackDown. Bryan accepted the stipulation and it’s official for next week.