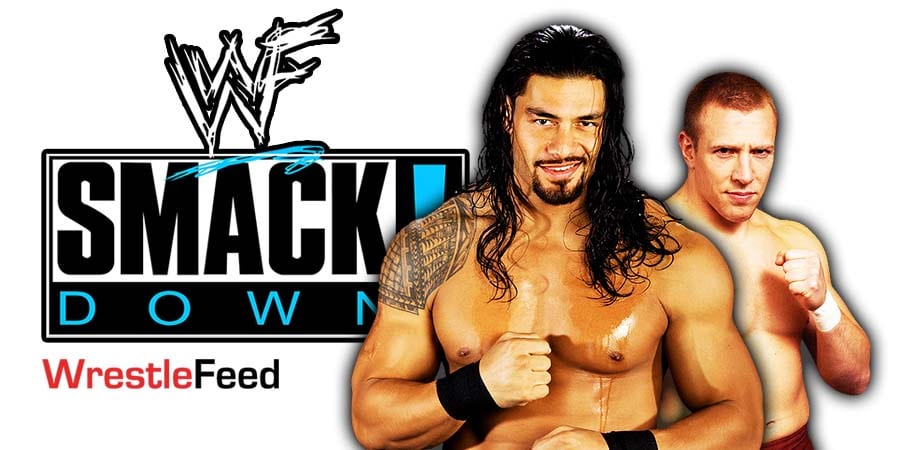 – Next week’s SmackDown will be a ‘Throwback Edition’.

– Aleister Black read the next chapter of his book – Reality.

"I could give you the keys to escape, but I won't!" – @WWEAleister

The new side of Aleister Black continues to show himself on #SmackDown! pic.twitter.com/vp5MQA2f22

– Big E def. Apollo Crews (c) via DQ after Commander Azeez interfered (Crews retained the Intercontinental Championship. After the match, Kevin Owens and Sami Zayn came out and everyone brawled. Sami took out Owens with a Helluva Kick. Commander Azeez then took out Sami with a Nigerian Nail)

– Seth Rollins challenged Cesaro to a rematch on next week’s SmackDown. Cesaro accepted.

– Roman Reigns (c) def. Daniel Bryan to retain the Universal Championship (Reigns finally debuted a new theme song tonight. Reigns made Bryan pass out to the Guillotine Choke Hold to win the match. Reigns brought chairs into the ring to hit Bryan with a con-chair-to, but Cesaro made the save and attacked Reigns.

Jey Uso jumped on Cesaro and they took out the Swiss Superman. Reigns then ended the show by hitting Bryan with a con-chair-to. Bryan’s career on SmackDown is over)

– The Warlord vs. Brian Jackson

– The Brain Busters vs. Brick Bronsky and Terry Daniels