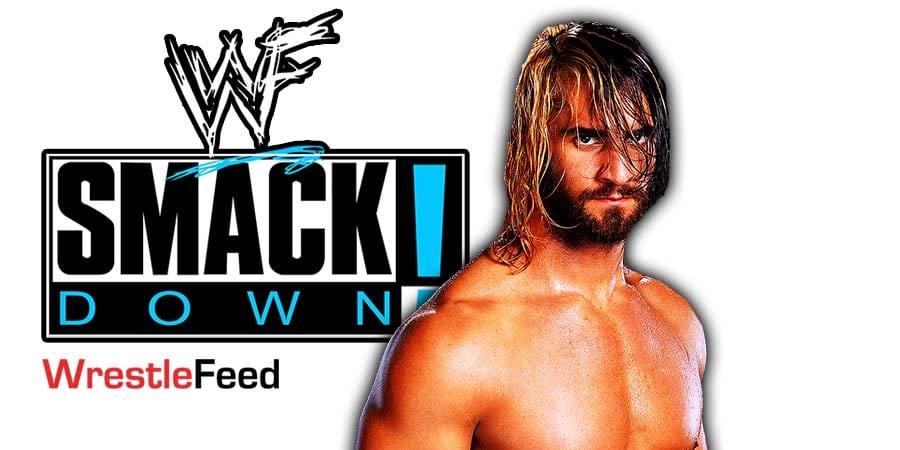 – Vince McMahon kicked off tonight’s SmackDown and asked the fans “where the hell have you been?”

– Universal Champion Roman Reigns & The Usos def. SmackDown Tag Team Champions The Mysterios & Edge (Jey Uso pinned Rey Mysterio by holding his tights. A brawl broke out after the match, which ended with Edge spearing Roman and applying the Crossface with lead pipe across his mouth, and Roman tapped!)

– Kayla Braxton interviewed Edge backstage and Edge said he has to beat Roman in his own game this Sunday. Seth Rollins interrupted the interview and said he hopes Edge wins this Sunday, because he’s going to win the Money In The Bank contract and finish what he started 7 years ago, when he had his boot on Edge’s neck.

– Sami Zayn said he wants the fans to chant ‘Justice For Sami’, but they don’t do it. Sami said he won’t allow the show to go on until he gets justice. Finn Balor then returned on SmackDown and laid out Sami.

– Shotzi & Nox def. WWE Women’s Tag Team Champions Natalya & Tamina due to distraction from Liv Morgan & Zelina Vega, who were brawling at ringside (A brawl broke out between the Money In The Bank participants after the match and Liv was left standing tall)

– Toni Storm will make her official SmackDown debut next week.

– Cesaro def. Otis via DQ after Chad Gable interfered (Cesaro began swinging Gable after the match, but Otis stopped it by attacking Cesaro)

– Baron Corbin asked fans for help and got on his knees to beg the people to donate $100,000 on his website so he can pay his bills, or else his family will have to move to his wife’s parents’ house. Kevin Owens then came out. Corbin said Owens can help him because he knows Owens has money and he obviously doesn’t spend it on his wardrobe. This led to Owens hitting Corbin with a Stunner.

– Seth Rollins def. Big E, Kevin Owens & King Nakamura (Owens hit Nakamura with an Elbow Drop off the top of a ladder through the announce table, and Rollins hit Big E with a Stomp on a Ladder to pick up the win. Rollins unhooked the Men’s Money In The Bank contract after the match)

KEVIN OWENS IS A MADMAN!@FightOwensFight shocks and awes the @WWEUniverse on #SmackDown! pic.twitter.com/7d6cEb8heO

This episode was broadcasted from the American Bank Center in Corpus Christi, Texas and featured matches, interviews & storyline segments on the road to the ‘WWE The Great American Bash 2007’ PPV.

1. No. 1 Contender (for the IC Title) Match: Jeff Hardy vs. Santino Marella vs. Shelton Benjamin vs. William Regal

5. The Sandman vs. Carlito