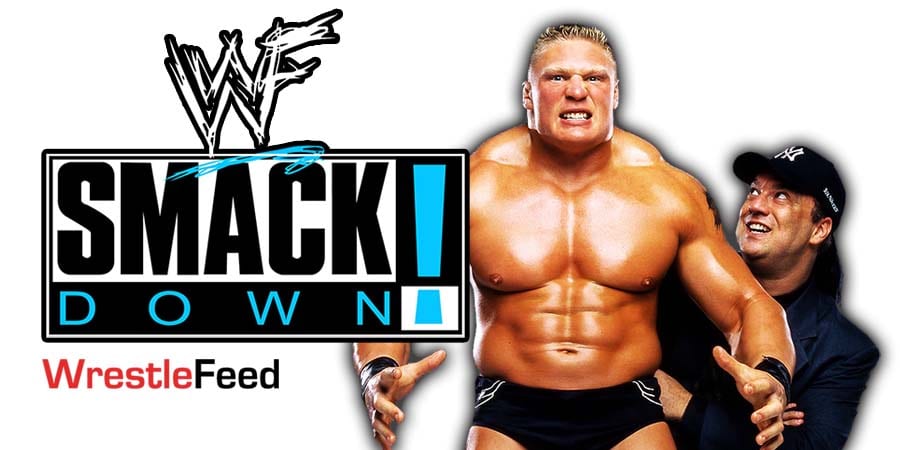 – Edge kicked off Supersized SmackDown with a promo in the ring, where he talked about his Hell in a Cell match against Seth Rollins next week at Crown Jewel.

He said he needs to end this feud next week and made the following promise:

“At Hell in a Cell, I’m going to scar your soul, and that is a scar that you’ll never, ever heal from.”

– Finn Balor def. Sami Zayn (Balor will now face Jinder Mahal or Xavier Woods in the Finals of the King of the Ring 2021 Tournament at Crown Jewel)

– Seth Rollins cut a promo on how he has been inside the Hell In A Cell structure more than Edge, and that he’s better than Edge in every single way.

– Zelina Vega def. Carmella (Zelina will now face Doudrop or Shayna Baszler in the Finals of the Queen’s Crown Tournament at Crown Jewel)

– The Usos (c) def. The Street Profits in a Street Fight to retain the SmackDown Tag Team Championship

– In the main event segment, Roman Reigns and Brock Lesnar came out to sign the contract for their Universal Championship match at Crown Jewel. Reigns told Heyman to review the contract and he then signed it. Lesnar then signed it too.

Reigns then called Lesnar a dumba$$ for signing without even reading the contract. Lesnar said he already read the contract this morning with his advocate Paul Heyman. Lesnar then left the ring while laughing, while Roman didn’t know what to do.

Also Read: AEW Rampage (Buy In) Results, What Was The Peak Viewership On YouTube?

This episode included matches featuring the SmackDown! Superstars on the road to the ‘WWE Survivor Series 2005’ PPV.