• David Schultz Says He Slapped Reporter Because Of Vince McMahon

During a recent appearance on The Two Man Power Trip of Wrestling show, David Schultz talked about Vince McMahon being behind 20/20 incident where he slapped reporter (John Stossel) which had him fired from the WWF, how he was better than Roddy Piper, the reason for rift with Hulk Hogan and how he had always been a true heel staying in character.

On Vince McMahon being behind 20/20 incident with John Stossel::

“I did what I was told to do. Vince McMahon told me to blast him and tear his ass up and to stay in character and be Dr. D. When I went out that door I did not know who John Stossel was. I made John Stossel (because) nobody knew who John Stossel was and after that night and that TV show and after all the whining and crying this guy did, crying like a baby he goes on Barbara Walters saying he (David) beat me up. But John Stossel last year on a TV show said his injuries were neurosomatic. That means that after he got his money he didn’t hurt anymore.

On his deposition he said he had permanent ear damage and the doctors at Madison Square Garden didn’t see damage on his ears at all. I didn’t touch his ears and if you slow down the tapes you will see that I did not touch his ears. He complained and whined and went to his brother and his brother was one of the doctors that checked him and his brother said he had permanent ear damage and he will always have it. Do you think that your brother is going to lie for you? I do. So the commission doctors didn’t know what they were talking about when they said he had no damage?

People just haven’t read the whole story and they haven’t dug deep enough. Vince McMahon paid him $425,000 without asking me anything, without going to court and John Stossel never sued me. That is a misconception because I was never arrested for anything or was charged with anything, Vince McMahon was. Vince McMahon than comes back and sues me for the $425,000 he gave this little wimp and now I have to fight Vince McMahon who is a well known billionaire and I just want to tell everybody out there…do not fight a billionaire unless you are a billionaire.”

On being better than Roddy Piper and rift with Hulkster:

“Hogan and me were a good team. Now Piper, you take a man and put him on TV and give him 15-20 minutes a day to talk and everybody sees him on TV people are going to like him. As far as I’m concerned Roddy Piper was not a wrestler. He wasn’t even a good worker as far as I’m concerned. If he had to go out and work his way to the top and not have good friends like Jim Barnett and different people that he worked with or for and McMahon, McMahon liked the boy a lot.

But he was okay with me and I’m not saying he wasn’t a nice guy he just wasn’t a tough guy and he didn’t know how to wrestle and he didn’t know how to fight but he could entertain you with his mouth because they gave him 20 minutes a day on TV and if you are seen 20 minutes a day just about every time the TV comes on with wrestling you become a top guy.

I got on a top spot because of what I could do and what I said and what I talked about and how I did what I said I was going to do. As far as Hogan, like I’ve said we were good friends and Vince told him you either pick David or me and of course he went with him and he never spoke to me after that and I haven’t talked to him since then. He did his own thing with Vince and Vince told him don’t talk to nobody and they had him in separate dressing rooms.

The guy couldn’t even dress in the same dressing room as other wrestlers. Vince didn’t want him to associate with nobody so I don’t know what the cause of that was but I guess it worked and he made a lot of money, had a lot of enemies, didn’t make many friends I don’t think but everybody wanted to be around him because of who he was.”

On being a true heel and staying in character:

“When I got through (wrestling) I would get to the dressing, grab a shower and go out the backdoor if there was a backdoor and leave. I didn’t sit around and talk to fans and sign autographs for little arena rats and different ones out there I didn’t do that. When I’d come in I would stay in the dressing room until my match and then I’d go the ring and that is when they’d see me.

Some buildings you can’t get out without going through the crowd. When I left everybody hated me. The police hated me, the security guards hated me and I could care less because the next time I’d come back they would buy a ticket just to watch me get beat or think they are going to see me get beat. I always had that philosophy in mind that everybody should hate me at these matches.

The promoters, the ring attendants, the people who own the building the guys working the TV whatever I didn’t care who they were if they came in the dressing room and they didn’t have a license for that state I’d run them out of the dressing room.”

Below is a photo that’s going around on the internet claiming to be an early design for the WrestleMania 34 stage: 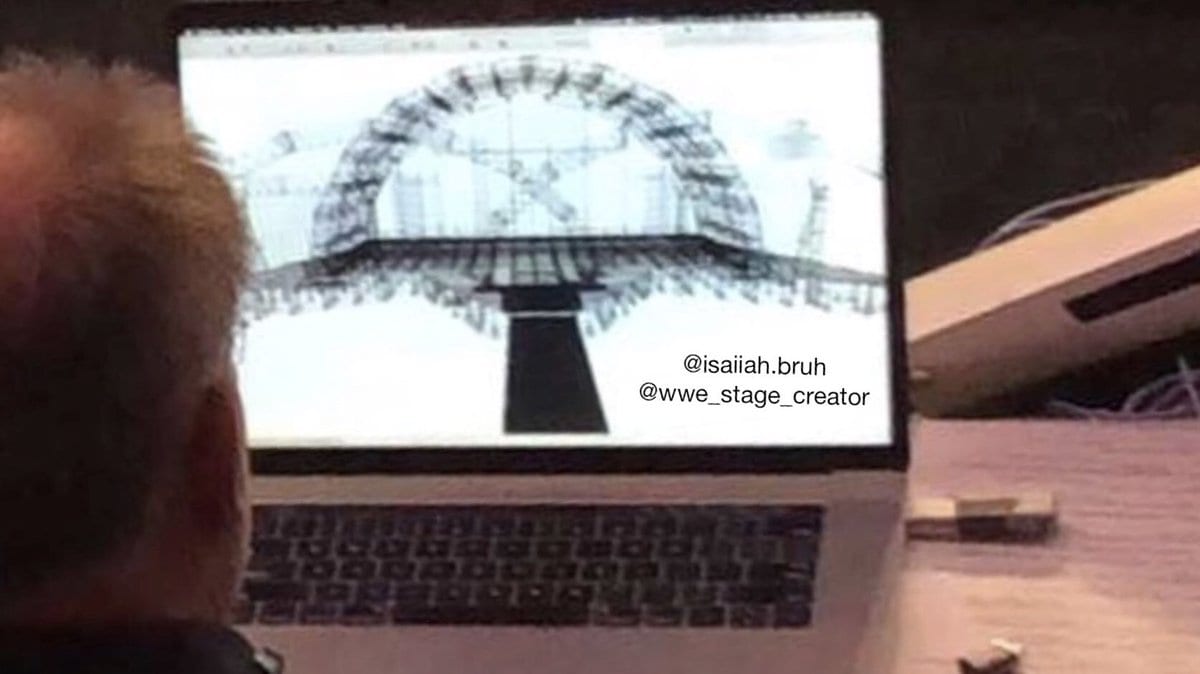 No word yet on if this is authentic or not. We’ll keep you updated.