Renee Young has become the first ever woman to be a full time commentator on Monday Night RAW.

I am so proud of @ReneeYoungWWE for becoming the first ever female commentator on #RAW! #YouDeserveIt! I can’t wait to hear her perspective every Monday Night! #Evolution pic.twitter.com/KAkxAvSPVm

Sabu later deleted the tweet but you can check out the screenshot below: 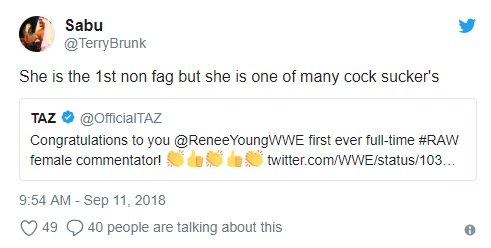 Sabu received backlash from fans after this tweet and this led to him posting the following tweet:

Lol oh boy I offended some one again .. lol wtf?