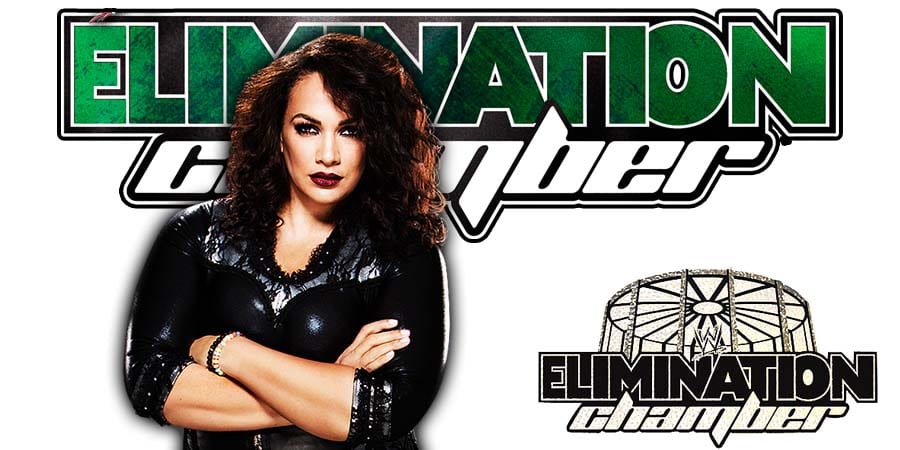 You can check out tonight’s match-card below:

Liv Morgan & Sarah Logan of The Riott Squad enter the match next! Logan bangs Sasha’s arm into the pod glass and then sends Bayley into the steel chains.

Liv & Sonya trade some hard shots and both women are down. Bayley tries to take advantage and goes for a pin on Liv, but Liv kicks out.

Bayley then lays out all women and is on fire. Mandy & Sonya now go for a Superplex on Bayley and Liv/Sarah join them for a joint move and they powerbomb them!

The IIconics enter the match next. They try to quickly pin everybody, but fail. They lay out Sasha next with a double team move and go for the cover, but Sasha kicks out.

The IIconics are now pressing Sasha & Bayley’s faces on the Steel Chains on the Chamber walls!

Fabulous Glow (Carmella & Naomi) enter the match next. They deliver Bronco Busters on all their opponents by setting them up in the corner.

Carmella hits a Hurricanrana on Billie Kay on the outside and sends Billie face-first into the Steel Chains!

Now everyone is laid out after hitting each other with their signature moves. Meanwhile Nia Jax & Tamina and slamming their pod door as they can’t wait to come out.

The IIconics do a double team pinning combination on Naomi and eliminate her (and her partner Carmella)!

Nia Jax & Tamina Snuka now enter the match and everyone goes after them, but they get laid out!

The IIconics have trapped themselves into a pod out of fear of Nia & Tamina. Nia & Tamina out power The IIconics to open the pod and they both slam them into the steel chains!

They hit double Samoan Drops on The IIconics and pin them.

Sarah & Liv climb on top of a pod and hit a crossbody on their opponents!

Nia hits a Samoan Drop on Liv from the second rope and Tamina hits a Splash on both Sarah & Liv to pin them.

Nia goes running after Bayley, but Bayley gets out of the way and Nia crashes after breaking the glass pod door!

Sasha, Bayley, Mandy & Sonya all team up to pin Tamina.

It’s now down to 2 teams: Sasha/Bayley vs. Mandy/Sonya. These two teams started this Elimination Chamber match and now they’ll finish it!

Sasha hits Sonya with a Backstabber and Bayley hit the Bayley To Belly and goes for the cover on Sonya, but Mandy breaks it up!

Mandy Rose is now on top of the pod. Sasha & Bayley climb up as well. Sasha & Bayley are thinking of Superplexing Mandy off of the top, but Sonya stops that from happening and Mandy kicks Bayley down.

Sonya accidentally Spears Mandy and Sasha looks in the Bank Statement on Sonya and makes her tap out! 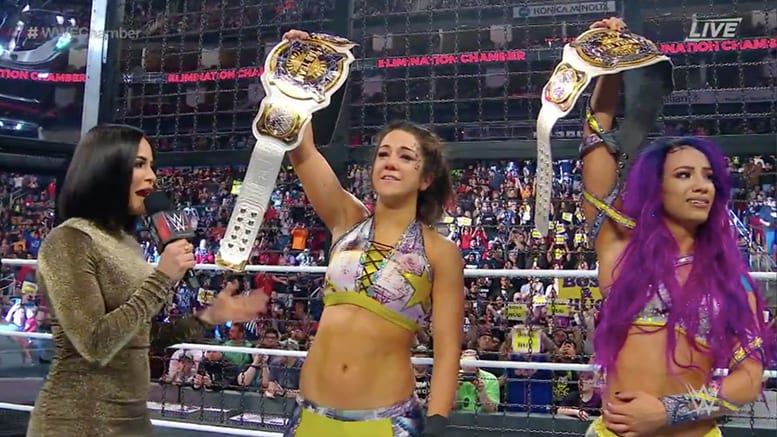 During the post-match interview, Sasha gets emotional and says this is only the beginning of what’s to come.