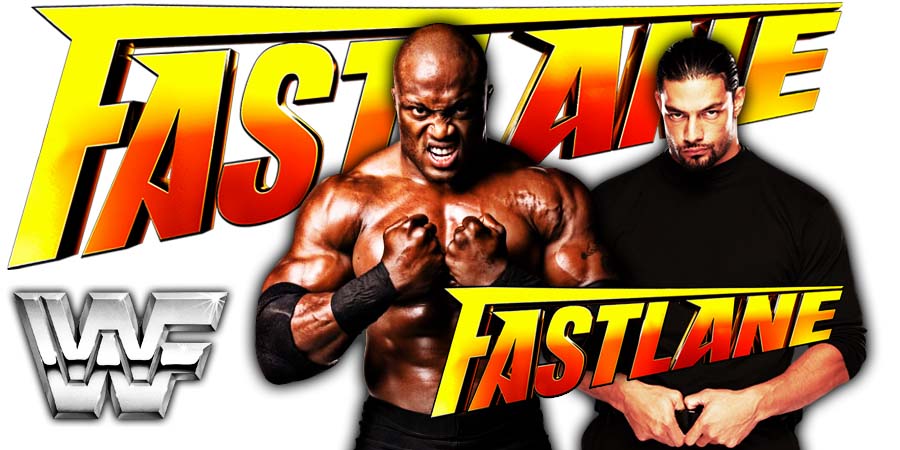 After the Charlotte Flair – Becky Lynch match was over, an in-ring segment with Elias took place.

After Elias’ segment was over, Lacey Evans came out to walk on the ramp. Elias was busy looking at Lacey and Randy Orton RKOed Elias out of nowhere!

After this, “The Phenomenal” AJ Styles hit Orton with a Phenomenal Forearm by coming out of nowhere!

Consider THIS a strike BACK by @AJStylesOrg to @RandyOrton! #WWEFastlane pic.twitter.com/FM5YRhFwqu

Up next is the main event of the evening and it’s a 6 man tag team match. This is Roman Reigns’ in-ring return and WWE is billing this as the “final” Shield reunion as Dean Ambrose is set to leave WWE in April after his contract expires.

Baron Corbin, Bobby Lashley & Drew McIntyre make their way out first, followed by The Shield (who come through the crowd).

Rollins & Lashley begin the match. Reigns gets tagged into the match and immediately takes down McIntyre with a Flying Clothesline!

McIntyre & Reigns now square off in the ring and Drew talks trash to Roman while delivering some vicious shots.

Reigns gets a hot tag in the match and he lays out all 3 men and he’s pumped! Reigns is looking to go Air-Reigns on Corbin on the outside, but Corbin enters the ring and hits a Deep Six out of nowhere!

Reigns & Corbin are now trading shots in the ring. Reigns hit Corbin with a Powerbomb in the ring and goes for the cover, but Corbin kicks out.

The other 4 men are fighting in the crowd and Rollins takes all of them down by jumping off the stairs!

Reigns & Corbin are going at it in the ring and Reigns nails a Superman Punch!

Reigns now fights off the heels and Corbin hits End Of Days out of nowhere! Corbin goes for the cover, but Rollins & Ambrose break up the pinfall attempt!

The heels are now clearing the announce tables and are looking to Powerbomb Reigns, but Rollins & Ambrose interfere.

Rollins Stomps Lashley on top of the announce table and Reigns Spears Corbin on the floor.

The Shield now does a 3 on 1 attack on McIntyre! The Shield then hits the Triple Powerbomb on McIntyre through the announce table! The crowd is chanting “one more time”.

The Shield has now surrounded Corbin in the ring and the fans are chanting “This Is Awesome”.

They hit Corbin with the Shield Bomb and Reigns pins Corbin to pick up the win for The Shield!

Michael Cole is selling this as the “End Of An Era” as this is the final time we’re going to see The Shield in a match together.