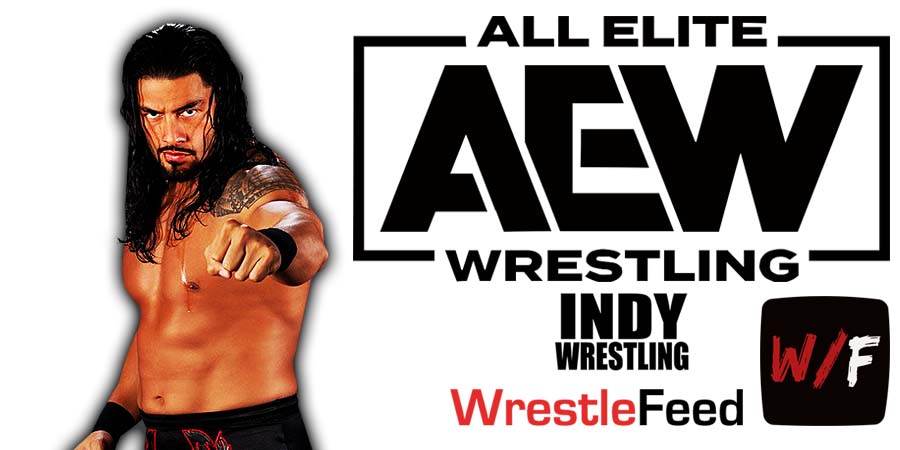 During an interview with Complex, Universal Champion Roman Reigns was asked if he wanted CM Punk to sign with WWE instead of AEW.

Here’s what The Head Of The Table said:

“If our audience wanted to see it and they were clamoring for it, couldn’t shut up about it, and all the stars aligned, as a businessman and as a performer who was trying to seek out the very best for the audience and try to captivate, I wouldn’t say no.

But I mean, on a personal level, it doesn’t do anything for me. That’s not going to elevate me at all. He’s older now. I haven’t really seen a full match. I’ve seen a clip or two. And to me, a step or two has been lost.

Then also he got his a$$ whooped in the UFC. I don’t think anybody really believes someone 200 pounds soaking wet with no explosive bone in their body could ever really do anything to me.

I’m 6-foot-3, 265 pounds, a legitimate athlete who can throw some weight around and has been on the gridiron at the highest level. D1. All ACC. I probably would’ve maintained in the NFL if my health issues didn’t happen when I was 22 years old.

So, I mean, when it comes down to it, I’ll throw him and pretty much the rest of that [AEW] roster out the club no problem. They’re just little brothers, you know?”

This led to former UFC Heavyweight Champion Junior dos Santos, who wrestled his 1st AEW match on Rampage on Friday, tweeting the following:

“Hey @WWERomanReigns I heard your interview. Please send the address of this club you will throw me and my little brothers out of #AEW”

Hey @WWERomanReigns I heard your interview. Please send the address of this club you will throw me and my little brothers out of #AEW pic.twitter.com/6QIO5337AI

Also Read: Roman Reigns Explains Why AEW & WWE Are Not In Competition

It was pre-taped at the Nassau Coliseum in Long Island, New York and featured matches, interviews & storyline segments on the road to the ‘WWF In Your House 25: Judgment Day’ PPV.

– The Headbangers vs. The Hardy Boyz

– The Godfather vs. Bradshaw

– Too Much vs. Golga & Kurrgan