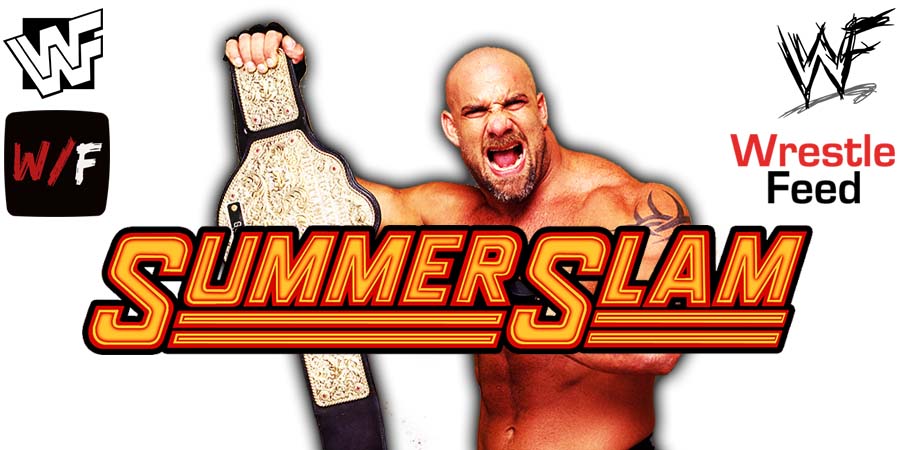 • Goldberg Set To Win The WWE Championship At SummerSlam 2021?

WWE Hall Of Famer Bill Goldberg will face Bobby Lashley for the WWE Championship in the co-main event of SummerSlam 2021.

Almost all the fans are expecting Lashley to defeat Goldberg to retain the Title, and move on to his next challenge.

However, we need to keep in mind the following two things:

– Goldberg has lost two matches in a row

After his SummerSlam match, Goldberg has two more matches left in his WWE deal. One of the main reasons that fans think Goldberg will lose is that he’s contracted to wrestle 2 matches per year (which would mean he can’t win the WWE Championship, as all his matches for 2021 will be done).

His 1st match this year took place at the Royal Rumble PPV (where he lost to Drew McIntyre in a WWE Championship match), and the 2nd one will be at SummerSlam.

However, with the Saudi Arabia PPV, WWE Crown Jewel 2021, coming up on October 21st, WWE can always book Goldberg for a match there, by using one of his matches from 2022 now or paying him more money to work an extra match (which won’t be a problem since WWE makes a lot of money from their Saudi shows).

Goldberg losing 3 matches in a row hurts his credibility and drawing power in the sense that beating him won’t mean much in his upcoming matches, one of which is expected to be a mega match against Roman Reigns (which was originally scheduled to take place at WrestleMania 36).

Goldberg winning the WWE Title at SummerSlam and then defending it 2 months later at Crown Jewel, and losing the Title there, doesn’t look impossible as WWE is fine with the idea of a World Champion not defending the Title every month (as seen multiple times during Brock Lesnar’s World Title reigns).

Also Read: How Many Matches Will CM Punk Wrestle In AEW?

On this day in 1989, Ted Turner’s World Championship Wrestling aired an episode of their weekly TV show ‘NWA Main Event’.

This episode featured pre-taped matches & storyline segments on the road to the “NWA Halloween Havoc 1989” PPV.