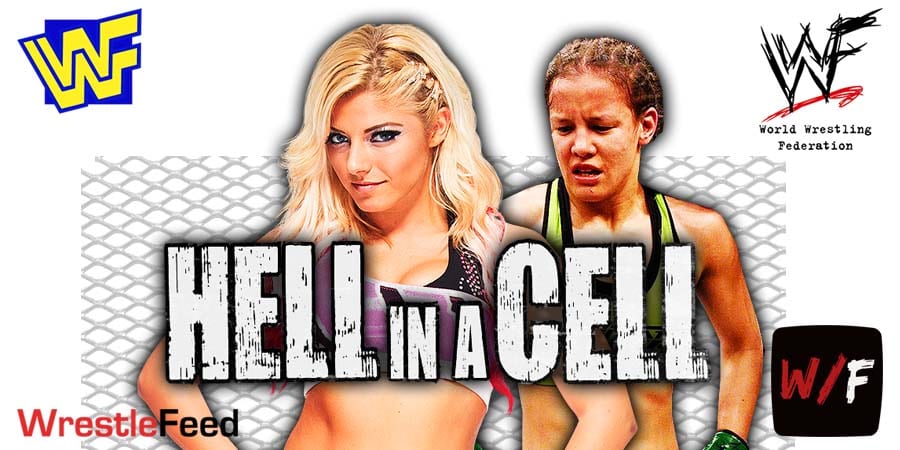 Tonight’s WWE Hell In A Cell 2021 pay-per-view is the final WWE PPV in the ThunderDome.

– Last Chance Hell in a Cell match for the WWE Championship: Bobby Lashley (c) vs. Drew McIntyre (McIntyre won’t get another shot at Lashley’s WWE Title if he loses)

– Hell in a Cell match for the SmackDown Women’s Championship: Bianca Belair (c) vs. Bayley

On the kickoff show, Natalya made Mandy tap out to the Sharpshooter to win the match.

The main PPV show kicked off with a Hell in a Cell match for the SmackDown Women’s Championship.

Bayley made her way out first, followed by the champion, Bianca Belair.

Belair won the Women’s Royal Rumble match earlier this year and then went on to defeat Sasha Banks in the main event of Night 1 of WrestleMania 37 to win the SmackDown Women’s Championship.

Bianca defeated Bayley at WrestleMania Backlash last month to retain her Title, and they look to end their rivalry in this demonic structure tonight.

After back & forth action, Bianca lifted Bayley on her shoulders and hit the KOD on Bayley on top of a ladder to win the match.

Bianca Belair (c) def. Bayley in a Hell in a Cell match to retain the SmackDown Women’s Championship

Up next is a rematch from WrestleMania 37 – Seth Rollins vs. Cesaro.

After good back & forth action, Rollins managed to pin Cesaro with a small package to get the win.

This is Cesaro’s second PPV loss in a row, as he lost to Universal Champion Roman Reigns last month at WrestleMania Backlash.

After this match, former Women’s Champion Alexa Bliss picked up a big win as she pinned Shayna Baszler.

This is a big win because Shayna is very protected as a singles wrestler and Alexa just pinned her!