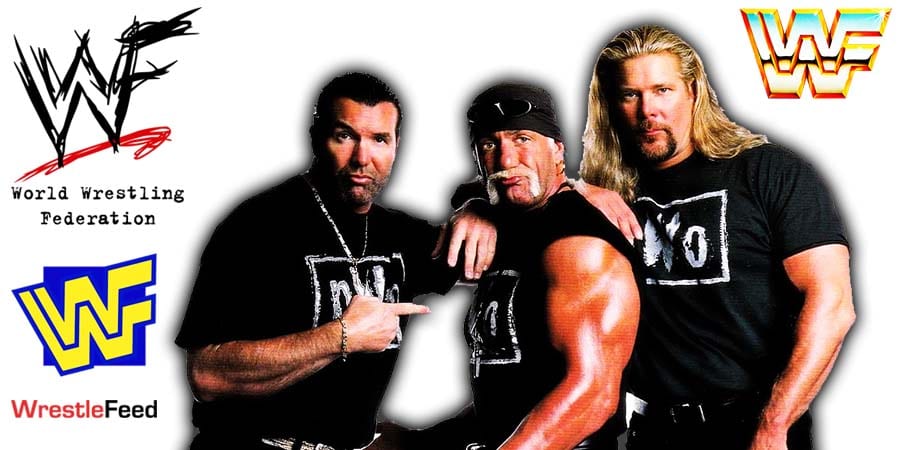 • How Vince McMahon Got His Revenge Against Hulk Hogan, Scott Hall & Kevin Nash In 2002

On a recent episode of his weekly ‘The Kurt Angle Show’ podcast, our Olympic Gold Medalist talked about Vince McMahon making the New World Order (nWo) do pre-tapes all night in 2002 to teach them a lesson and get some revenge against Hulk Hogan, Scott Hall & Kevin Nash for leaving the World Wrestling Federation and going to World Championship Wrestling in 1994 (Hogan) & 1996 (The Outsiders).

“I remember when nWo came back to the WWF, and Vince had them all night doing pre-tapes because they would say what they wanted to say. And Vince was like, ‘No, you’re going to say what I tell you to say,’ and they kept doing it all night. And Vince was also trying to teach them a lesson about you know, leaving him high and dry in the 90s and going to WCW.

I think there was a little bit of a message of, ‘I’m going to get you back for this, you’re going to be doing pre-tapes all night,’ and they did. They went until like 5 in the morning. So, Vince is a perfectionist, he wants it done right.”

It was broadcasted from the Northlands Coliseum in Edmonton, Alberta, Canada and featured matches, interviews & storyline segments on the road to the ‘WWF SummerSlam 1997’ PPV.