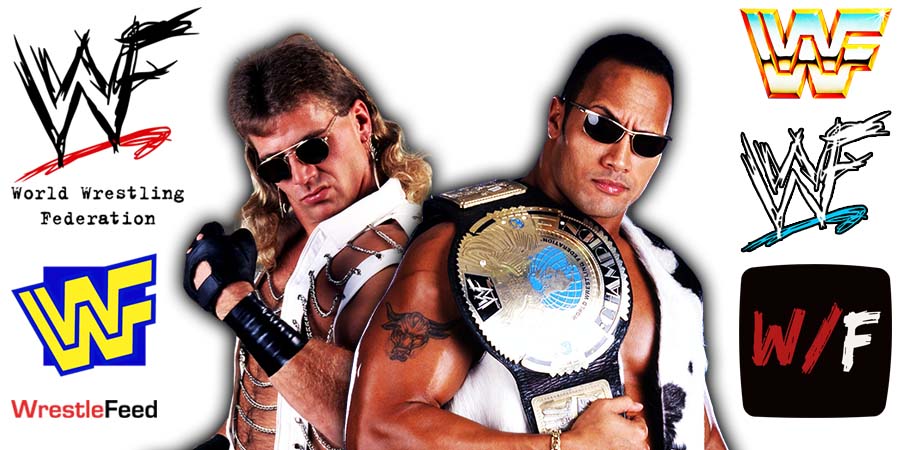 WWF Legend Shawn Michaels was recently interviewed on an episode of Logan Paul’s ImPAULsive podcast, where he revealed that his relationship with fellow WWF Legend Dwayne ‘The Rock’ Johnson wasn’t as bad as everyone thought.

“I’ve never worked with him. His daughter (Simone Johnson aka Ava Raine) is here in NXT. The times I’ve seen him, we’ve always gotten along okay. I don’t think it was as bad as everyone made it out to be. I know that I gave everybody a hard time back when I was younger.

When I came back, I made sure I went up to everybody and was at least like, ‘Sorry.’ That’s the best that I could do.

When I came back in 2002, and I knew there was going to be, ‘We’ll see.’ It was important to me to go around and make amends and at least tell everyone, ‘Sorry about the way I was. I have no excuse, I’m willing to earn back whatever. If you never talk to me again, I’m cool with that too.’”

In 2020, fellow WWF Legend Chris Jericho said the following on a Saturday Night Special show regarding the beef The Rock had with Shawn Michaels, dating back to an incident in Hawaii, when the Rock was still a teenager:

“As far as I know, it’s true, from what The Rock told me. It’s the reason why The Rock and Shawn Michaels never worked a match. I think Shawn might have insulted The Rock when he was a kid in Hawaii or something, The Rock’s got a long memory.

But yeah, even when Shawn came back, I believe there was one match where it was Triple H vs. The Rock in Louisville, Kentucky. Shawn was the special guest ref and they were angling to try and do a storyline feud between Rock and Shawn and I don’t think The Rock wanted to do it.”

In 2021, Bret Hart confirmed that both Shawn Michaels & Triple H were among those who gave The Rock (then called Rocky Maivia) a hard time when he first came to the World Wrestling Federation in November 1996.

Here’s what Bret had to say:

“A lot of the wrestlers would give him a hard time in those days, a really hard time, enough to try to break him and get him to quit and they almost succeeded. And I can remember going to bat for Dwayne quite a few times and kind of looking out for him, Owen too.

I think Owen and I had a lot to do with sort of looking out for him when he first came down. [The Rock] was kind of a marked guy.”