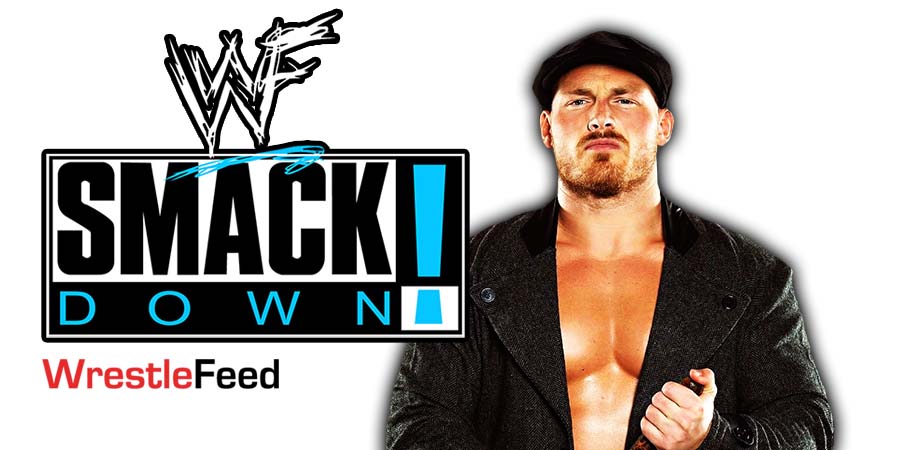 • Is There Backstage Heat On Ridge Holland After Big E’s Injury?

On Friday’s SmackDown, Ridge Holland hit Big E with a Belly-To-Belly Overhead Suplex outside the ring and Big E landed on his head.

According to PWTorch, Holland was very apologetic backstage and doesn’t have any heat:

“I asked some wrestlers about what happened and what their take of it was.

First of all, I will say I heard that Ridge Holland was very apologetic and very sorry about what happened backstage. He handled himself well. There doesn’t appear to be any heat on him.

This was not a reckless move or something that Big E wasn’t ready for or that seemed like in any way Ridge Holland did anything wrong.

In terms of the spot, it’s just accidents happen is what I was told. That said, WWE probably shouldn’t be doing moves like that at ringside with a mat over a cement floor.

One wrestler said that it looked like Holland hooked him lower than is wise in terms of getting the move with the right leverage to kind of fling him so he doesn’t end up landing on his head.

He might have released him a little early, in other words, stopped kind of throwing him and started worrying about his own bump sooner than he would have in the ring because he knew he was on the floor. And again, not out of selfishness or recklessness, but just instinct.

Big E is just thick and Holland is really strong but when you’re at ringside, a lot can go wrong. Holland is relatively new, obviously to be doing moves like that and Big E might have been the biggest guy he’s ever thrown and doing it at ringside just seems like a bad decision.

Hopefully, WWE sees this as an opportunity to clean up the style a bit and change the moveset. There’s just no reason people should be being tossed over their head at ringside in a way where there’s a chance they land on their head.”

On this day in Pro Wrestling history in 1981, Verne Gagne’s American Wrestling Association held a televised LIVE Event at the International Amphitheatre in Chicago, Illinois.

The show drew almost 10,000 people into the arena.