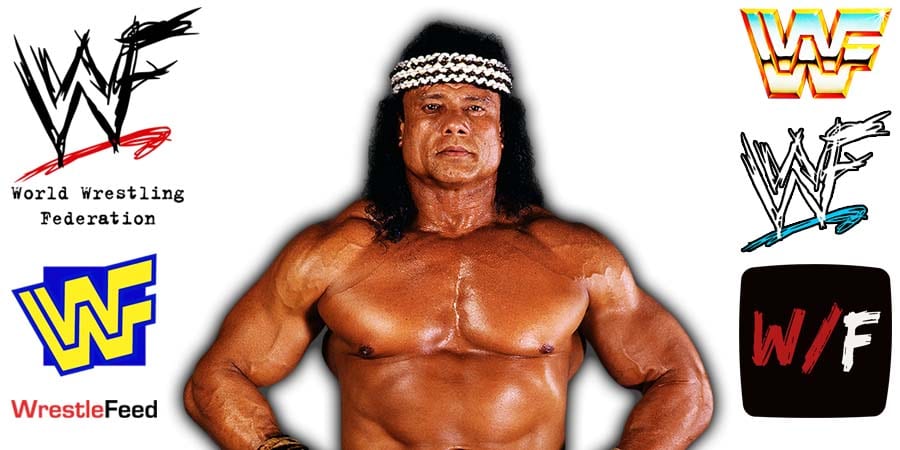 • Jimmy Snuka Had A Secret Wife

During this week’s episode, it was revealed that WWF Legend “Superfly” Jimmy Snuka was actually married to fellow Legend Gino Hernandez’s mother for 10 years, while the woman’s father was married to Snuka’s mother.

Here’s what Gino’s mother Patrice Aguirre had to say:

“When I met Snuka at the matches, he asked me for a date. He would always — when we were together, he would call his mother, Louise, who always talked to me on the phone. So, I think he went to Japan on a wrestling tour, and his mother, I convinced her to come and see me in Houston. And she came to see me and my father came in town.

The three of us went out, and the first night we went out, they danced, I didn’t even know my father could dance like that. She came back to the table and we went to the lady’s restroom, she said, ‘Patricia, your bloody father just asked me to marry him.’ And I said, ‘What? Y’all only known each other’, and she was a beautiful lady. She was from Fiji. So, they got married.

I was married 10 years to Jimmy Snuka. I just found out recently that he passed away, and I felt very bad because he was, regardless of what people said about him — about the time he married me, was the time that they say he had killed some woman or something.

That was very hard because he was around Mica, he was around me. Gina didn’t particularly care for him to be around me, but he was always so kind. Just one of the sweetest persons I’ve ever met. And his mother, too. His mother ended up being my father’s wife. So, we’re just one, big happy family.”

The entire event was originally taped on February 16, 1989 at the Hersheypark Arena in Hershey, Pennsylvania.

– The Brain Busters wrestled The Rockers to a double count-out