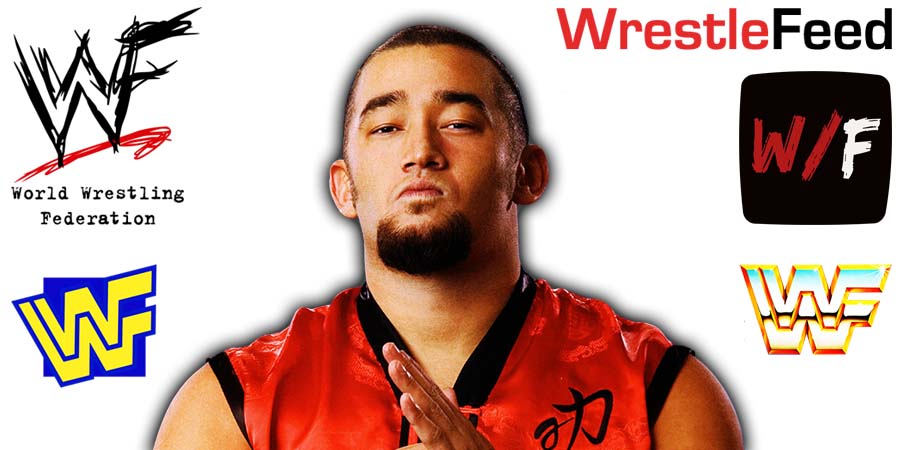 Jimmy Wang Yang returned to WWE in 2006 and that happened out of nowhere, while he was trying to get laid with a ‘very hot girl’.

Below is the story that he told to Wrestlingnewsco:

“I was just trying to get laid one night and there was a pay-per-view close by and this girl I was trying to get tickets and do the whole thing. This is after I got fired.

The chick was really hot. You know, they’re close by, get awesome tickets and everything, and when I showed up, you know, me and Vince crossed paths and he’s like, ‘Jimmy. Where the hell have you been?’ I was like, ‘You fired me.’ He said, ‘What? I did?’ It got busy.

He said I will come back and talk to you and then the day’s going by. Shawn Michaels was wrestling against The Spirit Squad. The spot that they did was Shawn Michaels when The Spirit Squad came out there, lifted him up, went through the table. Shawn was like, ‘I’m not sure if I want to do that.’ They said, ‘Oh, well, let’s do it to make him feel comfortable doing it.’

I was sitting at catering texting this hot chick, like, ‘Hey, I got tickets or whatever.’ [WWE Officials] came running to me and they said, ‘Jimmy, Jimmy, what are you doing?’ I said, ‘I’m eating in catering.’ They said, ‘Can we use you real quick?’ I was like, ‘Sure.’

I go to the ring, and the Spirit Squad, Shawn Michaels, Vince, and Michael P.S. Hayes were there. They said, ‘Jimmy, do you mind if we just throw you up and put you through this table?’ I’m like, ‘Okay.’ So I’m getting ready.

I get in the ring and then Michael Hayes tells Vince, ‘Hey Vince, do think Jimmy should do it? He’s not under contract.’ He said, ‘He should be under contract. Let him do it.’ They threw me up 20 feet in the air, went through the table, and Shawn asked me how it felt. I said, ‘It wasn’t too bad.’ Then he did that spot.

I went back to catering, you know, lining things up for the night. Then they came to me again. ‘Hey Jimmy, can you come to Columbus tomorrow for RAW?’ In my mind, what I was going to do that night, be up all night and do whatever, I was like, ‘Yeah, I guess. I’ll come to RAW’, so plans got changed. I went to RAW.

I showed up and they said, ‘Hey, do you mind doing a match on Sunday Night Heat with Charlie Haas?’ I’m like, ‘Sure.’ Then we did the match and we had a really good match, in my opinion.

After that, they were like, ‘Hey, can you come to Cincinnati tomorrow for SmackDown.’ I’m like, ‘I want to get laid’, but I was like whatever. That was my hometown for a long time, so I said, ‘Yea, I’ll come down.’ When I walked in, they said ‘Hey, come with me’, and they offered me my job back.

So the night goes by and then I was like, man, I want to go thank Vince McMahon for hiring me again. This is my third run with the company, so I wasn’t expecting getting hired back and you know all that stuff.

But this guy has hired me three different times so I knock on his door in his office and go in and he said, ‘Hey Jimmy. How the hell are you?’ I said, ‘I’m good. I’ve been in Ring of Honor doing stuff, but I just want to say I appreciate you hiring me back.’

He said, ‘Oh, I didn’t know you were fired, but anyway, the last time you were here, you were this Korean dude with this southern accent.’ I said, ‘I don’t have a southern accent, I don’t think. I do say y’all and that, but I just really speak English instead of like Ultimo Dragon or Tajiri with broken English.’

He said, ‘I didn’t let you talk because you were this Korean dude with a southern accent. So this time we’re gonna make a negative out of a positive. I will make you the Asian redneck. That’s funny.’ I was like, ‘What? Okay, whatever. I don’t care. You know, as long as the check clears every Monday I’m good to do whatever you want.’ He said, ‘Jimmy Wang Yang. That rhymes. That’s funny.'”

Two out of three falls: The Rockers defeated The Brain Busters