2. Bob Holly vs. The Brooklyn Brawler

This week’s episode of RAW, which featured an appearance by The Undertaker and Braun Strowman vs. Bobby Lashley in a Falls Count Anywhere match, drew 2.50 million viewers.

This is 10% up from last week’s 2.28 million viewers. Below are the results from this week’s RAW:

– Braun Strowman vs. Bobby Lashley ended in a No Contest when both Superstars were taken to a local medical facility

– United States Champion Ricochet def. AJ Styles to retain the Title; The Club reformed to attack Ricochet after the match

Below are the top 10 moments from RAW:

Cena spoke in Mandarin in the video, but WWE provided subtitles as well and you can read it below:

“Hello friends! Long time no see. Long time no see. A year ago I show a film with Jackie Chan and the director asked me if I could change my hairstyle. So right now you can see it’s long and wild. Now I’m filming a new movie and the director asked me if I can change my hairstyle. So now I will *snip* *snip* *snip* my hair. My role in this film is a secret! I can’t tell you anything about this role but I can let you see my new look! See ya!

Hello friends! Look at me now. I have a lot less hair now. So I’m all done with my hairstyle change for my new role in my new action movie. I’ll probably have another haircut in the future, just a small cut but for now I will look more like WWE John Cena. That look is similar to what I look like now so a lot of WWE fans will be very excited. I’m excited now. My hair is comfortable and not wild and crazy. So now you see me! See ya!”

Below is the difference in Cena’s previous and new look: 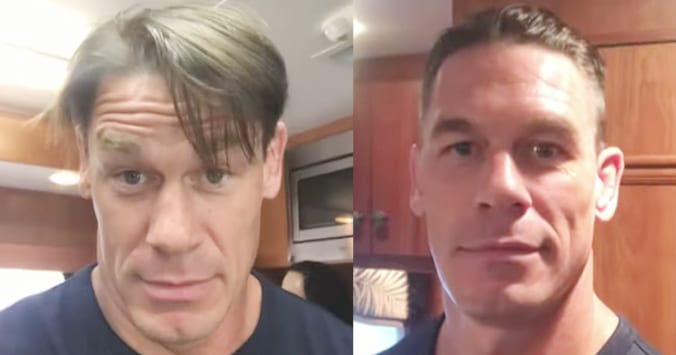