In the comments section of a Facebook video of The Hardy Boyz promoting a WWE Live Event in Rome, Italy, a fan expressed his displeasure on how The Hardy Boyz returned to WWE and betrayed their fans by abandoned their “BROKEN” gimmick.

Matt Hardy replied to him and noted that his “BROKEN” gimmick will return once things with Impact Wrestling are dealt with.

Below is Hardy’s reply:

“The #7Deities have told me that my #BROKEN CONDISHTION will return fully as soon as the OBSOLETE Owl is fully DELETED.”

Below is a screenshot of their conversation: 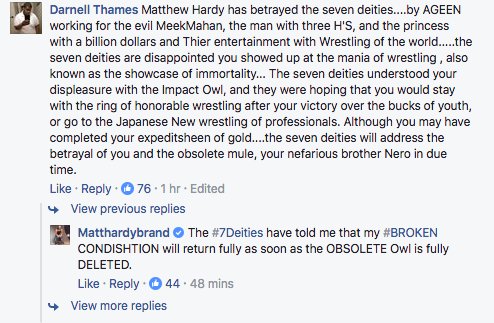 Below is a video of “BROKEN” Matt Hardy making fun of Triple H in TNA: