Up next is the money fight! It’s time for the RAW Women’s Championship match! Below is the Tale of the Tape for this match: 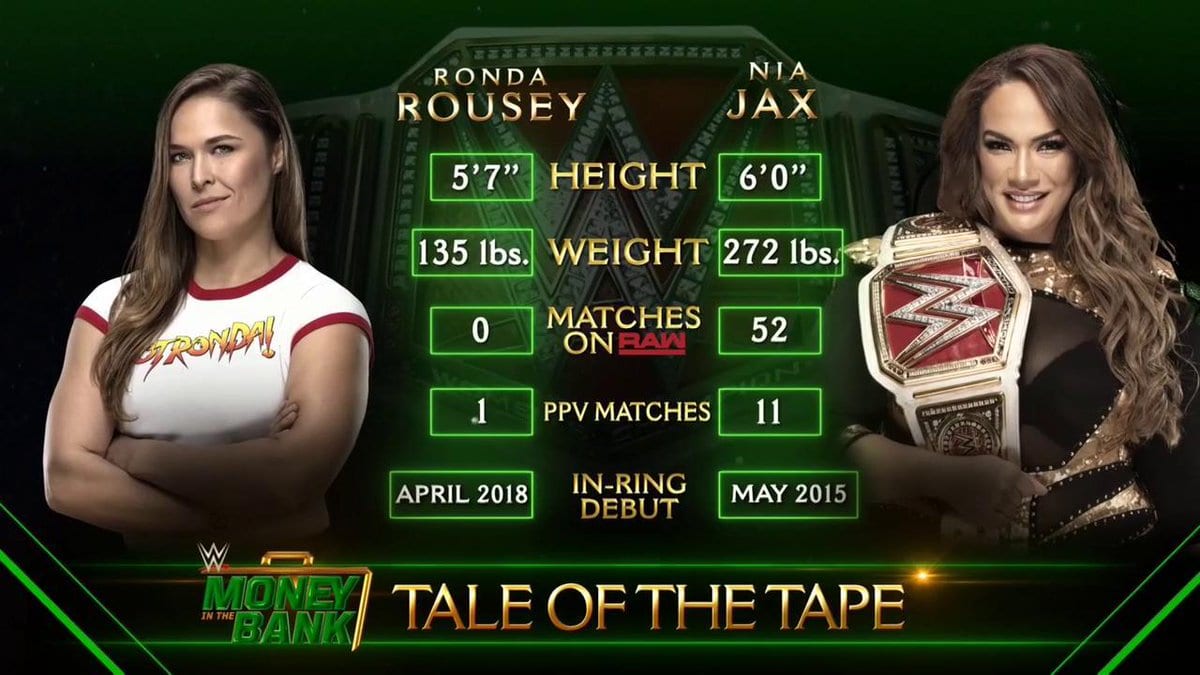 The match begins and Nia drives Rousey in the corner. Nia is throwing Rousey around real bad! Ronda starts delivering punches, but Nia throws her away again.

Ronda is on Nia’s shoulders and Rousey locks in the armbar, but Nia powers up and hits a big sit-down powerbomb!

Rousey fell through the ropes down to the floor on her own!

You're not in the octagon anymore, @RondaRousey… #MITB #RondavsNia pic.twitter.com/k57esdf9pJ

Nia slams Ronda on the barricade outside. Nia presses Ronda Rousey up and slams her down! Nia goes for the pin, but Rousey kicks out.

Rousey locks in the Guillotine Choke and counters to pin Nia, but Nia slams Rousey’s head down on the match.

Nia has now locked in a Bear Hug on Ronda. Ronda fights out of it, but looks exhausted.

Nia nails a Samoan Drop and goes for the pin, but Ronda kicks out!

Nia goes for the Leg Drop, but misses. Ronda locks in the Armbar in the corner over the top rope, but has to break the hold by the count of 5.

Ronda is now going to the top rope and hits a big crossbody! Ronda goes for the pin, but Nia pushes her away.

Ronda hits a modified Rock Bottom and goes for the Armbar, but Nia trying to hold her arm by the other one, but fails.

Alexa Bliss interferes and attacks Ronda with her newly won Money In The Bank contract! Alexa attacks Nia as well.

Alexa is now attacking Nia with the briefcase.

Alexa is now cashing-in her Money In The Bank contract! Alexa nails the DDT and attacks her injured arm. Alexa hits the Twister Bliss and pins Nia to win!

Alexa is now a 5 time champion!