In a medley performance, Pitbull will perform his newest hit single “Options” with Stephen Marley, before being joined by Flo Rida and LunchMoney Lewis to finish the act with his popular single and WrestleMania 33’s theme song, “GreenLight.” 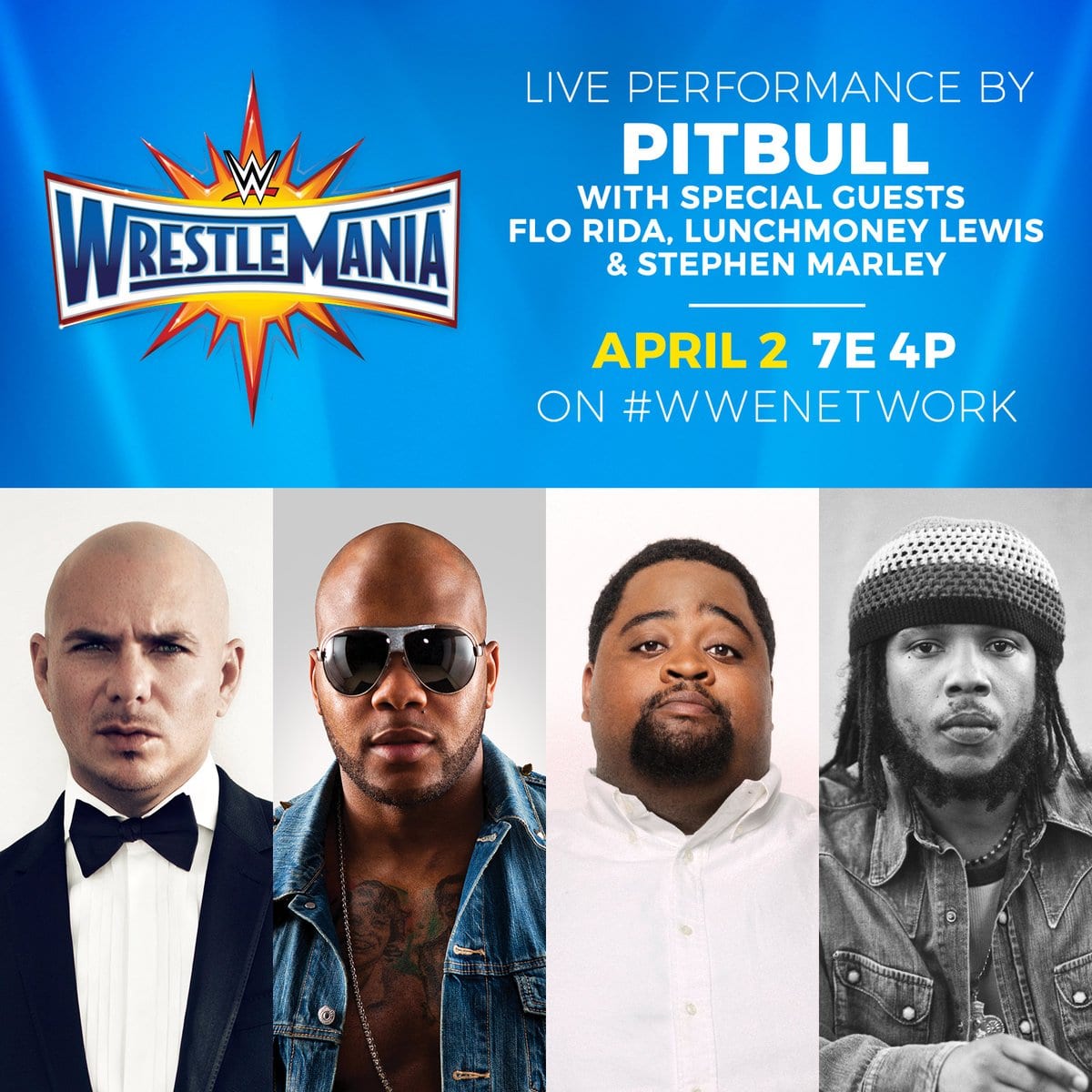 “WrestleMania is the ultimate stage and WWE is a global brand,” said Pitbull. “It’s an honor to partner with WWE. We are excited to get back into the ring with GreenLight and Options, Dale!”

“WWE has a long tradition of attracting the world’s most talented artists to perform at our biggest event of the year,” said Neil Lawi, Senior Vice President and General Manager, WWE Music Group. “It’s an honor to have Pitbull, Flo Rida, Stephen Marley and LunchMoney Lewis join the WWE family and add to the entertainment spectacle that is WrestleMania.”

Pitbull is a Grammy-winning global superstar and business entrepreneur. Landing No. 1 hits in over 15 countries, 9 billion YouTube/VEVO views, 70 million single sales and 6 million album sales, Pitbull does not stop. His social networking channels include nearly 90 million combined Facebook (@Pitbull), Twitter (@Pitbull) and Instagram (@Pitbull) followers, plus more than 8 million YouTube subscribers (PitbullVEVO and PitbullMusic). Making global music, Pitbull flaunts a style that’s indisputably his own. Pitbull also continues to forge a presence in the business world with his vodka Voli, fragrance line “Pitbull,” a strategic alliance with Playboy Enterprises and brand partnerships such as Norwegian Cruise Line. His Honey I’m Home production company has partnered with Endemol Shine North America for three New Year’s Eve Revolution live TV shows on FOX, and Pitbull’s Globalization (Ch. 4) on Sirius XM features some of the most prominent DJs from around the world.

Grammy-nominated Flo Rida is one of the best-selling music artists, having sold more than 80 million records worldwide. Part of the WWE family, Flo Rida has previously performed at WrestleMania®, hosted Monday Night Raw® and participated in WWE’s Tribute to the Troops®. Originally from Carol City, Florida, his 2008 breakout single “Low” was number one for 10 weeks in the United States and broke the record for digital download sales at the time of its release. His 2014 single, “My House”, became his tenth top 10 hit in the United States. His catalog also includes the international hit singles “Right Round”, “Club Can’t Handle Me”, “Good Feeling”, “Wild Ones”, “Whistle”, “I Cry” and “G.D.F.R.”.

Stephen “Ragga” Marley is the second eldest son of reggae legend Bob Marley and Rita Marley. He was raised in Kingston, Jamaica and started singing professionally at the age of seven with his elder siblings Ziggy, Sharon and Cedella as The Melody Makers. The singer, songwriter, musician and producer has consecutively landed #1 on the U.S. Billboard Reggae Album Chart for all of his solo albums and has earned a total of eight Grammy Awards for Best Reggae Album.

LunchMoney Lewis is a singer, songwriter and producer. He is best known for his 2015 single “Bills”, which topped the charts in Australia and peaked within the top ten in New Zealand and the United Kingdom. Lewis began working with Dr. Luke as a producer and first broke into wide recognition as a rapper after appearing on the song “Trini Dem Girls” from Nicki Minaj’s 2014 album The Pinkprint. He also co-wrote Jessie J’s single “Burnin’ Up” from her album Sweet Talker, and Fifth Harmony’s single “Bo$$” from the album Reflection. In 2015, he released his debut single as a solo artist, “Bills”, which peaked at 79 on the Billboard Hot 100 and peaked at number one on the ARIA Charts.