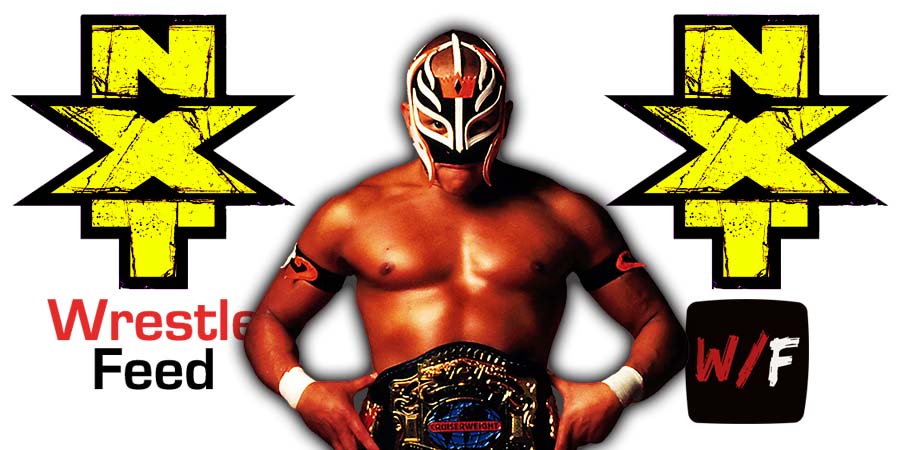 – NXT 2.0 kicked off The Miz hosting a Miz TV segment with new NXT Champion Dolph Ziggler. Ziggler said he will be a fighting champion. LA Knight then came out and wants to be his first challenger for the title. The Miz announces this Title match as the main event.

– Cora Jade said Raquel Gonzalez will be out of action for 4-6 weeks after Toxic Attraction attacked her. Cora stole the NXT Women’s Title & NXT Women’s Tag Team Titles from them.

– Dominik & Rey Mysterio confronted Legado Del Fantasma. Dominik will face one of them.

– Tiffany Stratton def. Sarray (Before the match, Tiffany attacked Sarray before she could transform)

– Tommaso Ciampa said that he’s been in NXT for the last 7 years and talks about memories he’s made. Ciampa said he wonders what’s the perfect way to have his Fairytale Ending in NXT.

Tony D’Angelo came out. Tony said the big fish he was talking about is Ciampa and wants to be his opponent at Stand & Deliver. Ciampa accepted. Tony then low-blowed Ciampa.

It looks like Ciampa will leave NXT in a few weeks and move to the move roster permanently.

– Indi Hartwell def. Persia Pirotta (After the match, Indi & Dexter Lumis had a Kiss Off against Persia & Duke Hudson)

– Toxic Attraction attacked Cora Jade and got their Titles back. Mandy sprayed painted Cora and said she’s not on her level and never will be. Mandy Rose vs. Cora Jade for the NXT Women’s Title will take place at Stand & Deliver.

– Imperium (c) vs. MSK vs. Creed Brothers in a Triple Threat Tag Team Match for the NXT Tag Team Championship will take place at Stand & Deliver.

The following two qualifying matches for the NXT North American Title Ladder Match at Stand & Deliver will take place next week on NXT 2.0:

Below is the updated match-card for NXT Stand & Deliver 2022 (which will take place a few hours before Night 1 of WrestleMania 38):

It was taped at the Worcester Centrum in Worcester, Massachusetts and featured matches, interviews & storyline segments on the road to the ‘WWF WrestleMania 13’ PPV.