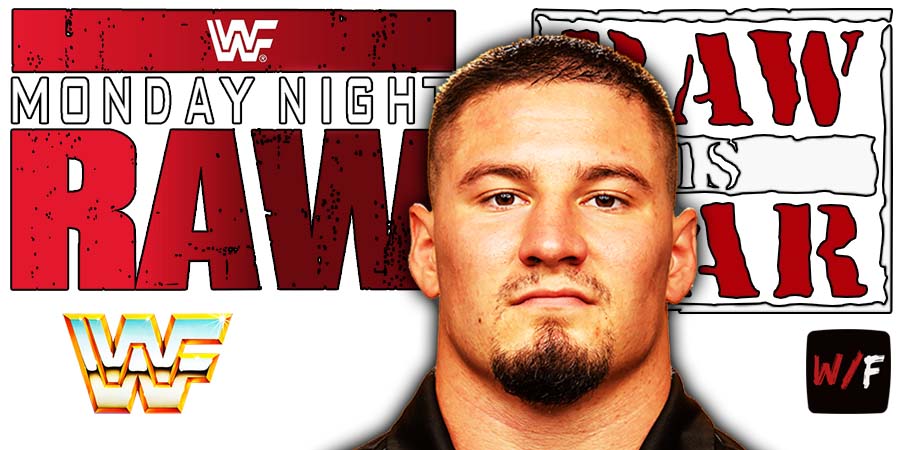 In a post-RAW interview two weeks ago, The Dirty Dawgs (Dolph Ziggler & Robert Roode) were getting interviewed backstage when Roderick Strong & LA Knight passed them.

NXT Champion Bron Breakker (son of Rick Steiner) then took a shot at Ziggler, by posting a clip of Bad Bunny eliminating Ziggler from the Men’s Royal Rumble 2022 match and writing the following with it:

On last week’s RAW, Ziggler lost to Angelo Dawkins of The Street Profits.

In a backstage interview after RAW, Ziggler was asked about these comments from Breakker.

“Well, it’s always good to have fans, I guess. And there are a lot of people online, who if you saw them in real life, they wouldn’t say exactly the same things, you know what I mean?

I think it’s Tyson or somebody, Mike Tyson, probably has said everyone runs their mouths until you see them in person and they shut the hell up or you punch them in the face, and that changes everything.

A lot of people ask me after matches like this, ‘Dolph, you good?’ I go, ‘No, not good, I’m the best MF’er we got.’ So maybe one of these days those people that run their mouths online have to deal with me, in person.

So maybe Breakker and his Title, maybe I take it away from him. Maybe I stop by, who’s to say? Anyway, good luck kid, keep throwing your name out online, it works for everybody.”

Breakker has now accepted Ziggler’s challenge. Below is what he tweeted:

“@HEELZiggler mentioned coming to NXT and taking my Title. You want the next shot after Santos come on down. Your move #Iwillsayittoyourface”

Breakker will defend the NXT Championship against Santos Escobar at NXT Vengeance Day on February 15.

It was pre-taped at the Market Square Arena in Indianapolis, Indiana and featured matches, interviews & storyline segments on the road to the ‘WWF In Your House: No Way Out of Texas’ PPV.

– The Rock vs. Tom Brandi