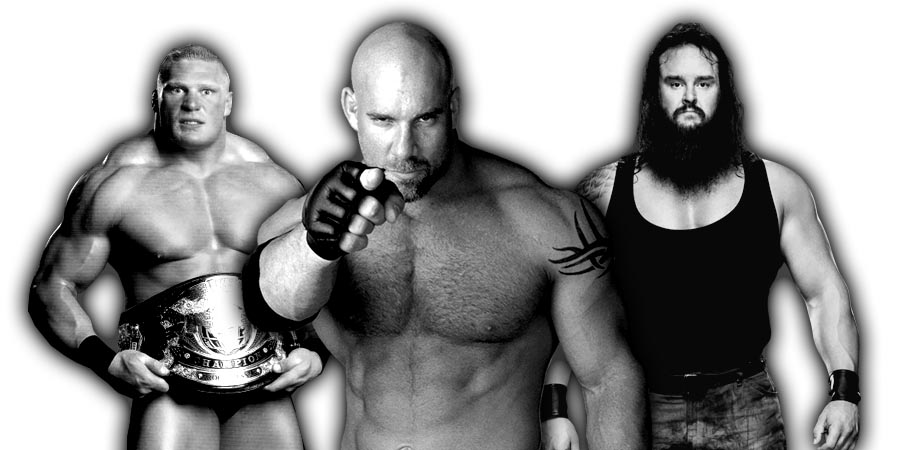 Let’s take a look at the top 20 news stories of the day from the world of WWE (Goldberg, Women’s Money In The Bank, SummerSlam 2017) & Professional Wrestling:

As we all know, Donald Trump (the current President of USA) was in then ECW Champion Bobby Lashley’s corner at WrestleMania 23 during the “Battle of the Billionaires”. Lashley (who is now the Impact Wrestling World Heavyweight Champion) wants to relive that moment from 2007 as he has invited Trump to be in his corner for his Slammiversary 2017 match against Alberto El Patron (f.k.a Alberto Del Rio in WWE).

Nashville (June 23, 2017) – IMPACT Wrestling World Champion Bobby Lashley made an unprecedented Presidential appeal on Thursday morning. Via Twitter, Lashley (@fightbobby) asked President Donald Trump to be in his corner for his title defense at Slammiversary on July 2, when Lashley puts the gold on the line against Alberto El Patron. El Patron earlier this week announced that his father, legendary Mexican wrestler Dos Caras, will be in his corner at Slammiversary. Lashley asked Trump to join him at Slammiversary, which will be held on pay-per-view and filmed at the backlot of Universal Studios Florida in Orlando.

“Well, it looks like I need to find a cornerman for Slammiversary? @realDonaldTrump? It won’t be the 1st time! #reallegend,” Lashley tweeted.

IMPACT Wrestling is waiting for an answer from Trump.

IMPACT Wrestling is a subsidiary of Anthem Sports & Entertainment Corp.

About IMPACT Wrestling
IMPACT Wrestling specializes in television properties, events, products, merchandise and music, as well as the management and promotion of professional wrestlers. The roster features such greats as Bobby Lashley, Alberto El Patron, EC3, Eddie Edwards, Davey Richards, James Storm, Low-Ki and the high-flying X-Division, plus the lovely and lethal Knockouts, including Gail Kim. Its highly successful flagship, IMPACT WRESTLING, broadcasts in more than 120 countries around the world, including Thursdays at 8 p.m. ET/PT on Pop (a joint venture of CBS Corporation and Lionsgate) in the United States, Fight Network and GameTV in Canada, Sony Six in India and Spike UK in the United Kingdom.