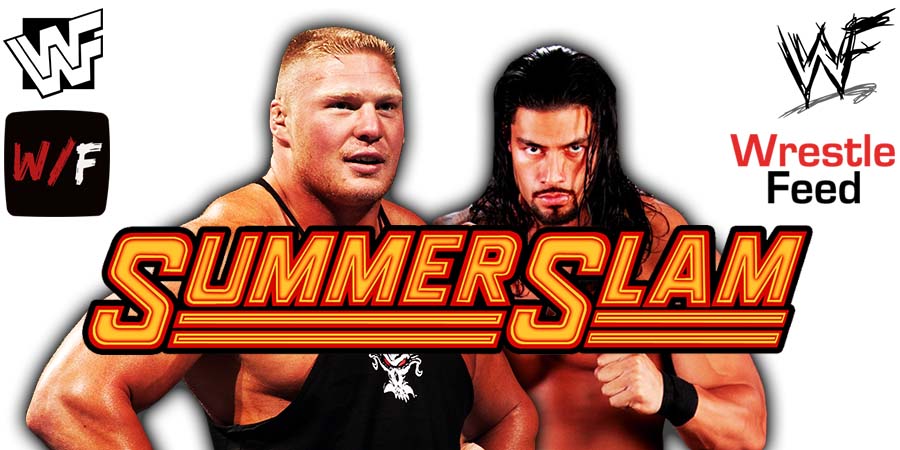 Brock Lesnar was scheduled to appear on tonight’s SmackDown, but it looks like he won’t.

According to Bryan Alvarez of the Wrestling Observer, Lesnar was pissed after hearing about Vince McMahon’s retirement and left the arena just hours before tonight’s show:

WWE has also removed Lesnar from the SmackDown preview on their website.

Lesnar is scheduled to face Roman Reigns in a Last Man Standing match for the Undisputed WWE Universal Championship in the main event of SummerSlam 2022 on July 30th.

The Observer is reporting that if Lesnar doesn’t return, then they have a SummerSlam replacement ready.

WWE Hall Of Famer Goldberg recently noted in an interview that he’s still under WWE contract and is waiting for them to call.

The 2018 WWE Hall of Famer also noted that he wants a rematch against Reigns and then said the following about losing to The Tribal Chief:

“It doesn’t eat at me by any stretch of the imagination, but it eats at me, 100 percent. Roman and I were on a collision course for a long period of time.

It never happened when it would have been the best, but to say anyone that beats me doesn’t deserve to have their a$$ kicked afterward, I’d be a liar if I said anything other than that.”

Word going on is that WWE could call Goldberg back to replace Lesnar next weekend at SummerSlam.

King Jim Duggan vs. The Gladiator

The Red Rooster vs. Chris Evans