7. Since When Has Bray Wyatt Been Dating JoJo?

Former WWE Champion Bray Wyatt’s wife Samantha Rotunda has filed for divorce and is accusing Wyatt of having affair with Raw employee and ring announcer JoJo.

Wyatt then filed a counter-petition for divorce to request an injunction to keep his wife quiet about this whole situation in order to protect his image in the community and force his wife from making any defamatory comments about him. Below is his wife’s response to the injunction request:

“It is a shame that the Husband would make such false claims and attempt such media gaming. Ms. Rotunda will not only prove Husband’s allegation and claims are nothing more than a media ploy and endeavor to create an offense to defend his adultery and misdeeds. Husband’s deceitful allegations and defamatory statements are decidedly an attempt to pull the wool over the public’s eyes when his antics and affairs become more public.”

Below is what Samantha’s lawyer had to say:

“Samantha is saddened by the divorce as she and the husband have been together since college (Troy University in Alabama). But she hopes that all may be resolved amicably and as soon as possible so that she and their daughters may move forward with their lives.”

Below is what Wyatt’s lawyer had to say:

“I do represent Mr. Rotunda in his dissolution of marriage case in Hernando County, Florida. As you know, these cases involve the private lives of the participants and sometimes unpleasant disputes. I would ask that you respect the privacy of both litigants in this matter and I have no other comments to make.”

Below is what Samantha recently posted on Instagram regarding this and hinted that Wyatt has been with JoJo since 2015: 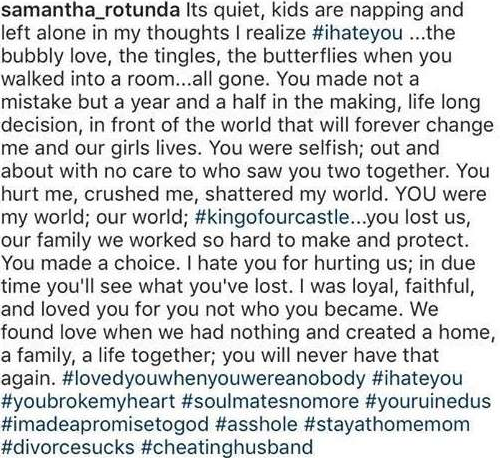