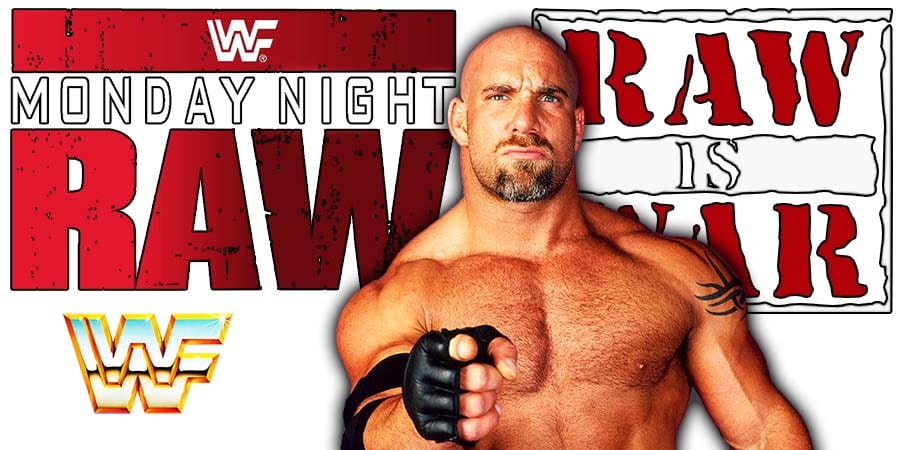 – WWE Hall of Famer Teddy Long interrupted The New Day and The Miz & John Morrison’s opening segment and announced that Miz & Morrison will face The Undertaker! WWE Official Adam Pearce then came out and told Teddy that’s not possible. Teddy then set up The New Day vs. Miz & Morrison in a Tag Team match.

GOOD LUCK, @mikethemiz & @TheRealMorrison, you're gonna have to take on…

– The New Day def. John Morrison & Mr. Money In The Bank The Miz

– In a backstage interview with Charly Caruso, Randy Orton said he couldn’t set Alexa Bliss on fire last week because he changed after facing The Fiend and ended up showing mercy to Alexa. Orton said he hates himself for it. Orton then said he doesn’t want to talk about The Fiend and he’s going to take a walk now and find some legends, and remind them who he is: The Legend Killer.

– 24/7 Champion Angel Garza met Alicia Fox, Mickie James, Sgt. Slaughter and Tatanka backstage. Garza gave a rose to Mickie, but Slaughter took it, smelled it and called him a Maggot!

– AJ Styles def. Elias (Jaxson Ryker tried to hit Styles with a Guitar after the match, but Omos saved AJ by breaking the Guitar with a kick)

– Randy Orton confronted Big Show backstage. Orton said he ended Big Show’s career last year. Big Show says he can compete any time. Orton then grabbed Show by the throat and challenged him to do something about it.

Nope, not responding to @RandyOrton's mind games on #WWERaw!@WWETheBigShow is here to enjoy LEGENDS NIGHT, not get in a fight! pic.twitter.com/jrjpiZf6bu

– In a backstage segment, Hulk Hogan put over WWE Champion Drew McIntyre for carrying the company during the pandemic era.

– Randy Orton met Mark Henry backstage and said he’s entering the Men’s Royal Rumble 2021 match. Orton then made fun of Henry because he can’t enter the match as he’s beat up. Orton then recalled Henry hitting him a lot of World Strongest Slams back in the day and that he owes him a lot of receipts. Orton then said he will give him a pass if he goes away right now. Orton then told him to get out of here and Henry left.

Garza wanted to give Torrie a rose, but Torrie said she’s in the middle of a conversation and directed him to a room claiming there’s Cardi B, Kylie Jenner and Ariana Grande over there.

Garza went in the room and The Boogeyman was there. Garza ran out of the ring and got pinned by R-Truth to lose the 24/7 Title. Ron Simmons then showed up and said “DAMN!”.

– Drew McIntyre (c) def. Keith Lee to retain the WWE Championship (All the Hall of Famers and Legends watched this match from the stage. After the match, WWE Hall of Famer Goldberg came out and said Drew has size, speed, but one thing he doesn’t have is – respect. Goldberg says Drew sees Legends as washed up has-beens. Goldberg said Drew thinks he’s better in his prime than these legends were in their prime. Goldberg says he’s not demanding anything, he’s here to challenge Drew to a WWE Championship match at Royal Rumble 2021. Drew says he’s all about respect. Goldberg then shoved Drew down and Drew then got in his face to end RAW Legends Night)

"Fighting you would be like fighting my own DAD!" – @DMcIntyreWWE#WWERaw pic.twitter.com/BBnyV0A0SQ

On this day in 1997, the World Wrestling Federation aired the first ever episode of their new weekly TV show ‘WWF Shotgun Saturday Night ‘.

It was pre-taped at the Mirage Nightclub in New York City, New York and featured matches, interviews & storyline segments on the road to the ‘WWF Royal Rumble 1997’ PPV.

1. The Flying Nuns (The Headbangers) vs. The Godwinns

2. Goldust vs. The Sultan